Skip to content
Drivers, Get Your DIRTcar Membership today!
World of Outlaws 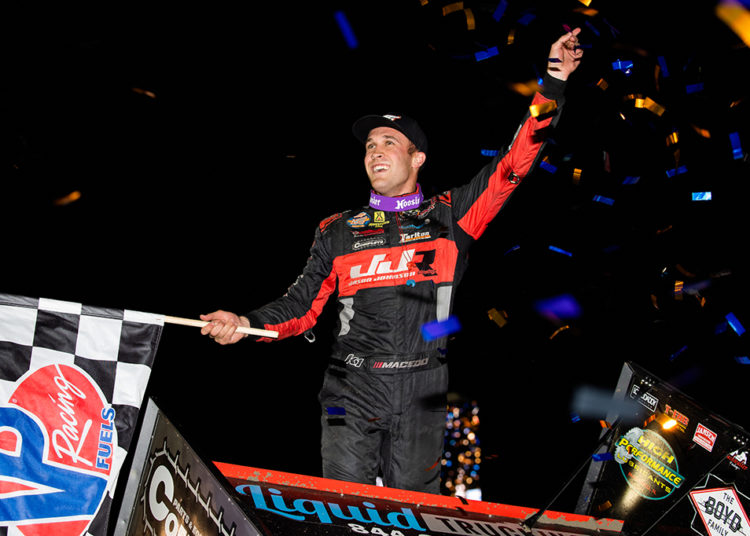 With the spin of a wrench Phil Dietz took Carson Macedo from an uneasy feeling to the best car in the field on Friday night.

The revered crew chief at Jason Johnson Racing went to work after a mediocre preliminary performance and sent the Lemoore, CA native on track with what he called “one of the best cars I’ve ever driven in my life.”

Macedo masterfully picked his way from tenth-t0-first and executed a late-race pass to steal the win from Sam Hafertepe Jr. with four laps remaining at Volusia Speedway Park. A confidence booster and chemistry builder for a driver and team that know their potential can reach championship heights in 2021 with the World of Outlaws NOS Energy Drink Sprint Car Series.

“It’s not every night that your car is that dominant,” Macedo mentioned of his Kistler powered Maxim #41. “I mean that thing was just perfect to drive. Phil [Dietz], Clyde [Knipp], and Nate [Repetz] were incredible tonight. You know, I felt really balanced and great all through DIRTcar Nationals last month, but early tonight I just didn’t feel good. Phil and the guys made a lot of changes for the feature and nailed it. I could go anywhere I wanted. I’m so happy to get a win for this team, these sponsors, a lot of really great people involved.”

At the start of Friday’s 30-lap, $10,000-to-win feature, it was Sam Hafertepe Jr. of Sunnyvale, TX and David Gravel of Watertown, CT pacing the field. Hafertepe, who won his second DIRTVision Fast Pass Dash of the season to claim pole position, bolted away and controlled the opening 11 laps. The first stoppage was a surprise when points leader Logan Schuchart stopped in turn four following contact with Gio Scelzi amidst a top five battle.

Macedo made his biggest move on that first restart, advancing four spots in one lap with a great fire off the high side of the half-mile. The next restart, however, spelled trouble when the #41 had to line up on the low line. Restarting with 17 laps remaining, Macedo surprised himself and quickly took third from Sheldon Haudenschild, and then set his sights on Hafertepe and Gravel out front.

“Hafertepe chose the outside and I was stuck on the bottom, which made me nervous,” Macedo noted on the final restart. “I was on the top every restart prior to that and the bottom wasn’t getting great starts. I didn’t really get a good start, but it was fairly decent and let me sneak back into the top groove in front of Donny. I got that run on Sheldon because he went low, and I was able to slide by him real quick. I felt like my car was as good as those guys, if not better once I got to third. I just needed traffic to move around a bit and capitalize.”

And capitalize he did. With heavy lap traffic in play, Macedo reeled in the lead duo and made it a three-way war with seven laps left. The #15H, #2 and #41 ran bumper-t0-bumper-to-bumper with the win on the line.

Macedo slid by Gravel for second on the 24th lap and two laps later, he was sliding Hafertepe for the top spot. His massive turn one slider with four laps to go was a thing of beauty, sweeping through the middle and clearing Hafertepe with ease to steal the top spot in the waning circuits.

The final four laps went by like a breeze as the 24-year-old pilot drove off into the Florida night with a 2.167-second advantage at the checkered flag. Friday’s feature victory marked the seventh of Macedo’s World of Outlaws NOS Energy Drink Sprint Car Series career, and his first of the 2021 season.

Albeit only three of 80+ races are complete, Macedo still achieved a milestone by moving atop the World of Outlaws championships standings for the first time in his career. Something he knows is useless in the middle of March, but deep down means a lot to a California kid chasing his dreams.

“It doesn’t mean anything because we’re so early in the year it just doesn’t matter yet,” Macedo said on the points lead. “For me, personally, inside my own head, it’s really cool. My goal in this sport is to be a World of Outlaws champion. In order to do that, at some point you gotta lead the points. You have to clear those milestones and hit those accomplishments to get there, right? We have a team capable of winning it this year. I know it’s too early to think of that though, we’re just gonna do our best every night and let the cards fell where they fall.

Settling for a second-place finish after leading the opening 25 laps was Sam Hafertepe Jr. aboard the Townline Variety #15H. A tough pill to swallow for a driver that’s hungry to end his nine-year winless drought with the Outlaws, but it’s the latest sign that his operation is as good as ever. Friday’s runner-up result is Hafertepe’s best Series finish since a third-place finish at Lernerville’s Silver Cup in 2013.

“We’ve made leaps and bounds compared to what we came here with in February,” Hafertepe commented on the progression of his program. “To be right here right now is like a win to us. We’ll keep building and look to get better.”

Rounding out the podium with a last-lap pass to finish third was Fresno, CA’s Gio Scelzi aboard the KCP Racing #18. It was his first night with trusted crew chief and friend Bernie Stuebgen of Indy Race Parts in the KCP camp and their revived relationship already appears to be paying dividends again.

“It’s huge, it’s like getting the band back together,” Scelzi said on working with Stuebgen again, who he won his first two Outlaw races with. “I’m feeling comfortable and confident with myself. If we keep running like this, the wins will come eventually.”

Closing out the top ten at Volusia Speedway Park was Donny Schatz in the Tony Stewart Racing #15, David Gravel in the Big Game Motorsports #2, Sheldon Haudenschild in the Stenhouse Jr. Marshall Racing #17, Cory Eliason in the Rudeen Racing #26, Parker Price-Miller in the PPM Racing #19, Logan Schuchart in the Shark Racing #1S, and Aaron Reutzel in the Roth Motorsports #83.

UP NEXT – On Saturday, March 6, the World of Outlaws NOS Energy Drink Sprint Car Series ends a 38-year absence from Tampa’s East Bay Raceway Park. If needed, a Sunday rain date is scheduled to complete the show. You can BUY TICKETS HERE.

Two of the biggest season-opening events at Volusia Speedway Park for the World of Outlaws and DIRTcar will act as the perfect bookends for the series’ 2022 Florida events.

The Sunshine Nationals, featuring the World of Outlaws Morton Buildings Late Models, will kick off the Late Model season with another thrilling Late Model-Palooza, on Jan. 20-22.

“Dirt racing in Florida is going to be bigger and better than ever at the start of 2022,” said Brian Carter, World of Outlaws and DIRTcar CEO. “Demonstrating our commitment to our fans and drivers, we’ve coordinated with the Lucas Oil Late Model Dirt Series so there is no overlap of events, allowing fans to enjoy the best Late Model drivers in the world battle throughout Florida on a weekly basis from January to February.

“Then, that will lead into the always action-packed DIRTcar Nationals at the beginning of February where the best Sprint Car, Late Model, Modified and Big Block drivers will compete for the must-have golden gator trophies.”