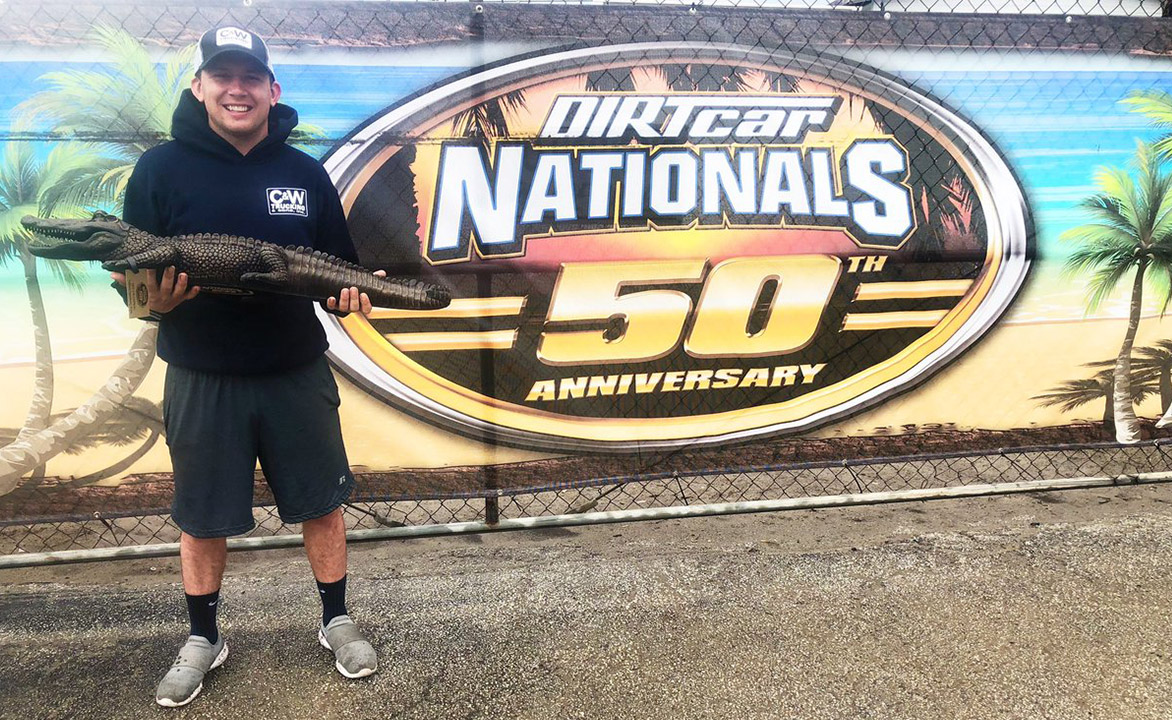 WITH THE HELP OF A FLORIDA COUPLE, MORAN MADE THE TRIP TO FLORIDA FOR A CAREER WEEK

A trip to Volusia Speedway Park for the 50th DIRTcar Nationals wasn’t initially on Devin Moran’s 2021 itinerary. His new gator-wide smile signified his joy of that change.

Moran, 26, of Dresden, OH, claimed his first DIRTcar Nationals Big Gator championship on Saturday after an impressive display of consistency through the five rounds of Late Model races. If it wasn’t for a broken driveshaft on Wednesday, he could’ve finished on the podium in each event – he had finishes of third, second, 31st, first (his first Volusia win) and second.

“It’s pretty cool,” Moran said about claiming his first Big Gator title. “It’s pretty unexpected, to be honest. At the start of the week, we weren’t even planning on coming down here. Then to run top three even night, except for that one DNF, which I think we had a shot to win, it just gives us a lot of confidence… To start out the year the way we have, it’s been a lot of fun and like I said, it gives us a lot of confidence.”

If it wasn’t for Florida-residents Terry and Marry Ann Wright – who have been friends with Moran’s car owner for a while – Moran and his team would’ve skipped the prestigious event. They’ve been trying to get the team to come down for a couple of years and this year helped make it affordable for them, Moran said.

Bobby Pierce was his closest competitor in the championship hunt going into the final race – before Saturday’s event was canceled due to rain. He entered the night only nine points behind Moran and was on track to cut into that lead after setting Slick Woody’s Quick Time and starting on the outside pole of the Feature.

However, as fate would have it, he suffered a motor issue and the team was unable to get a new one in before the Feature started. Pierce hoped in Reid Millard’s car for the Feature but pulled in early and was unable to finish, unofficially handing the Big Gator championship to Moran who finished second that night. He earned his first golden gator trophy the night before.

“Like I said, it’s so unexpected,” Moran said. “First of all, with us not coming and then winning the whole week. It sucks with what happened with Bobby that he had to change motors and couldn’t… It’s a bummer that he couldn’t race. But we had a really consistent fast car all week. It’s a special thing to take home this gator with as unexpected as it was.”

UP NEXT
The World of Outlaws Morton Buildings Late Model Series, on Friday, March 5, will return to Duck River Raceway Park in Lewisburg, TN.