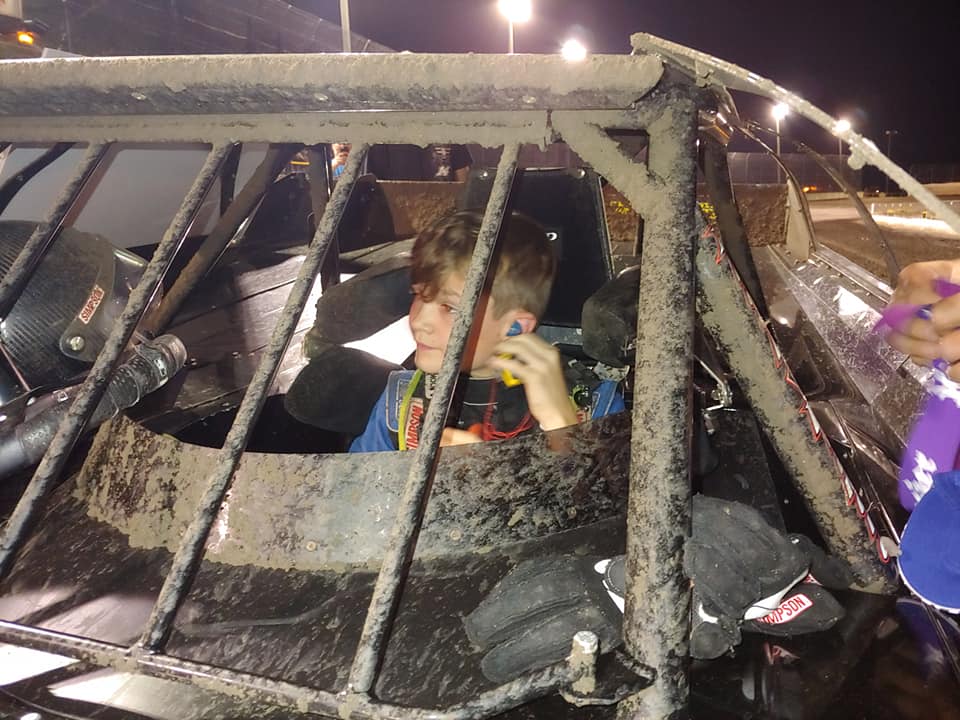 After a week of bad weather capped by tropical storm Eta crossing the Florida peninsula and laying down several inches of rain, there wasn’t much hope that we would get to race,  but on Thursday the skies cleared, the ground dried, and the enthusiasm returned. Volusia was set to race!

The night kicked off with a salute to our Veterans and our honorary starter Wally Wallace who served for 42 years dropping the first green flag. The heats set up what would be five of the most memorable features of the year. Rookies rose to the occasion, and the old guard proved they could still hang with the young guns of the sport.

The 602 Late Models were the first feature, and likely the most talked about feature in the Southeast in the coming week. After winning his heat race Trey Mills attempted to shock the world as the 12 year old started from the inside of row 2 to demonstrate how he stacks up against the elite of his class.

Multiple feature winner Dustin Carter assumed the early lead but suffered a mechanical problem just before hallway and surrender the lead to a challenging Mills. There was no looking back after that as Mills went on to win with Brenden Smith and Mikey Kopka rounding out the top three.

The second feature of the night proved to be one to remember as well. With the Reutimann Memorial Race just one week away, Justin Allgaier was in town to shake down his ride. David and Buzzy Reutimann were ready to go as well, but local hot shoe Garret Stewart wasn’t willing to share the podium just yet.

Stewart has won every UMP Modified race this season at VSP, and tonight was no exception. Holding off challenges from David Reutimann and later Allgaier, Stewart kept his perfect record intact and cruised to yet another win in 2020 collecting the $1000 in prize money.

The next feature up, the Florida Late Models saw a familiar face biding for another win on the night. Trey Mills once again raced from the front of the pack after a second-place heat race finish and a good draw put him on the pole for the 20-lap, 27-car, $1000-to-win feature event.

Clean air was the key as multiple wrecks rendered several cars unable to finish the event. Up front Mills handled the restarts like a seasoned veteran, holding off challenges from some of the best in the business, but a restart on lap 11 left Mills the hunter instead of the hunted as Shan Smith took advantage of the high line that was starting to come in and assumed the lead that he wouldn’t give up. Smith and Mills checked out on the pack running one, two but the story book ending had to wait another week as Smith was the victor this week and went home $1000 richer.

The ¾ Modified feature saw a familiar battle up front as heat race winner Pat Vareika attempted to sweep the night but to do so had to battle Paul Shead in the feature.

The side-by-side dual in the feature was led from the beginning by pole sitter Paul Shead, who assumed the high line while Vareika worked the bottom side. Lap after lap left us wondering which one would come out on top. Right down to the checkered flag they battled with Shead pulling ahead at the line to take the victory.

In the final feature of the night a 28-car field was ready to go after the $1000 prize money in the D4R Street Stock season finale. Bruce Griffin led them to green in a race with multiple wrecks, including one between Griffin and David Showers that ended with Griffin taking the trip to the pits on the hook.

Three-wide racing was the theme early and Justin McGauley used the battles behind him to put distance between himself and the field as he pulled away to win his first feature at Volusia Speedway Park. Joe Belkey went on to finish second and David Showers Jr finished third.

The next race is the Reutimann Memorial, which begins with a Thursday Practice and racing on Friday and Saturday nights. The November 19th -21st event is just days away so we will be racing again before you know it!