BARBERVILLE, FL – School was in session for the 604 Late Models at the inaugural Battle in Barberville, Saturday night.

The teacher was Derike Bennett, who led every lap of the 30-lap Feature to capture the $3,000 purse.

“Once the race began, I needed to get to the lead and set my own pace,” Bennett said. “That long green flag run started to become worn on me a little bit. But other than that, the race went great, and all went as planned.” 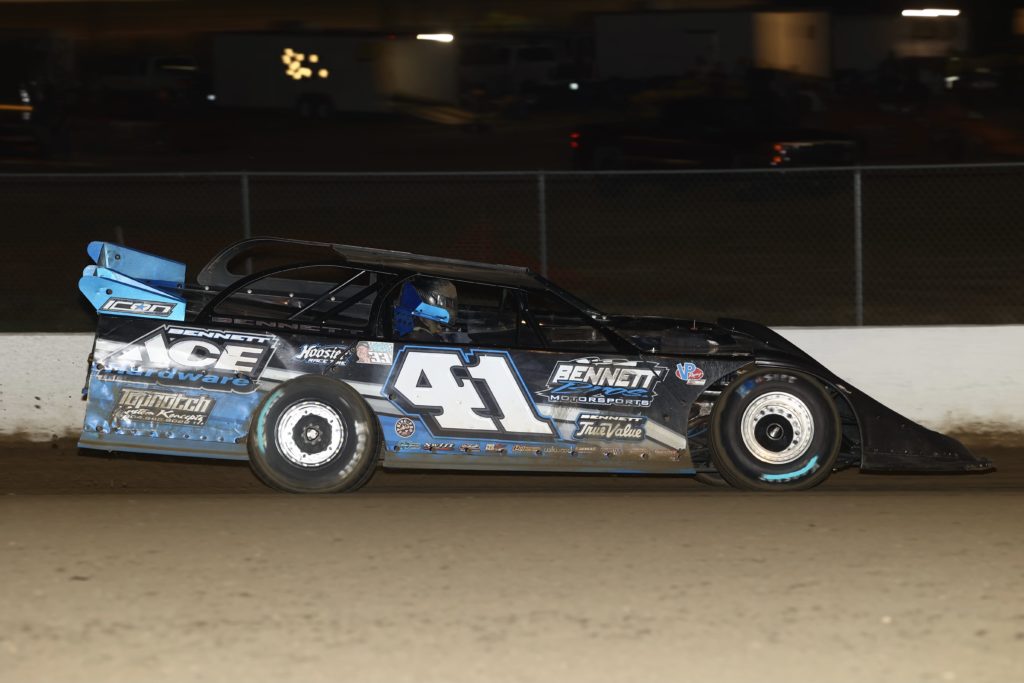 Bennett, a Jacksonville, FL native, had a commanding night –  winning Heat 2 and drawing the Pole position for the Feature.

“The only adjustments I needed to make was a little tune right before the Feature to get the car to turn better,” Bennett said. “The traction was in the track, and getting the car to turn was what helped get to where I needed to be. I want to thank my family and Extreme Racing Engines. I can’t do this alone for sure.”

Dustin Carter came home second after a night of dueling with the competition around him. The #5 Action Graphix Late Model won Heat 1 and stayed inside the top three the entire Feature. The Decatur, GA driver battled the car the entire night, but he smiled on a podium finish to end the 2022 season.

Closing out the podium, 2022 604 Late Model track champion Joe Kump has a lot to be happy about with how the season played out.

“We had a lot of good consistency this year,” Kump said. “It’s been a long year, a lot of crazy things in the year to make it exciting, maybe we can try to do it again next year.”

The Lake Helen, FL driver ran second in Heat 1 and started fourth after the redraw. Once the race began, he quickly jumped to third and kept it safe to round out the podium.

“I was kinda concerned on the start because I was on the outside,” Kump said. “But, once we got to Lap 3, it was follow the leader and focused on hitting my marks.”

Wrapping up the top five in the Feature was Garret Stewart and Clay Bedenbaugh. Stewart earned the Action Graphix Hard Charger Award after charging up three spots from his starting position.

“It was good, and a lot of fun,” Drellos said. “The track had a lot of grip in it, which may not have been the best for me since we were wide open 90% of the time. But, for my first time, I was pretty happy with what happened.”

Going from a Big Block Modified to a 604 Late Model has its differences, but the Queensbury, NY driver continued to study and enjoy the new challenge as he prepares for the DIRTcar Sunshine Nationals, Jan. 18-21.

“The biggest thing is that I didn’t show up free enough, which is similar to the Big Block when I’m here,” Drellos said. “So, I’m sure we can find better balance. I mean, I have about 80 laps in this car, so I’m ready for what’s to come in January.”

The next race at the World’s Fastest Half Mile will be the DIRTcar Sunshine Nationals on Jan. 18-21. The Late Model Palooza will feature 602 Late Models, 604 Late Models and the World of Outlaws CASE Construction Equipment Late Models. For more information on the next race and other events held at the track, visit VolusiaSpeedwayPark.com