TWO IS THE MAGIC NUMBER: The Big Dog 25 Shows A Series Of Two’s To Come

If your number was 2 in tonight’s running of the Big Dog 25, you probably came home a winner. This was the case for both Trynt Lloyd and Joe Belkey as they won in their respective divisions in a 2 car. Though, while they enjoyed a great night, let’s rundown everything that happened in tonight’s racing.

Trynt Lloyd was by far the driver of the night as he took both the 602 & 604 Late Model feature wins. He won the 602 heat, and led the field for most of the way in both races. It did come with challenges to his lead, as Jason Fitzgerald finished second in both late model features, Trey Mills, Donnie Chappell and Joe Kump proved to bring some healthy competition to the late model field. It will be fun to see who else will make it to victory lane as the season goes on.

It only took 2 features, but Garret Stewart has returned to his winning ways at Volusia in the DIRTcar UMP Modified. Starting from the pole after a redraw, he showed the field the whole way to rack in another feature win in his time at Volusia. Without a doubt, the run for a 6th consecutive championship has returned with a vengeance. The question will be if anyone else will be able to challenge him. Seth Geary has proven to be fast, but does he have better consistency than what Stewart brings each season?

The ¾ modifieds showed themselves to be great in competition, wherever it is through the field. At the start, the dynamic duo of the Minchew’s showed up and out, with Korbin and Lawton leading most of the first half. Then, a familiar face to ¾ victory lane, TImmy Hogan, spoiled the party for the duo, and went on to win. The Olmsted’s of Tad and Wade also came to fight, so they will be something to watch for next Saturday.

Lastly, Joe Belkey came up and showed his dominance in the Thunder Stocks again, blowing out the field to win his second of the two features this season, in a number 2 car. Coincidence? Perhaps, but what was not questionable was the sheer speed he had out on the track. Don’t be surprised if he racks up a ton more wins as the season progresses.

Next Saturday will be the Work Force 25 here at the World’s Fastest Half-Mile. Gates will open at 4:00, with Hot Laps kicking off at 6:00. Can’t make it? No problem, DIRTVision will broadcast all the action live with flag to flag coverage. We’ll see you then! 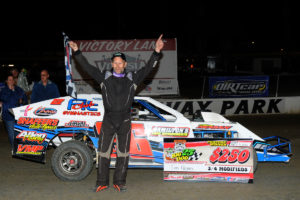 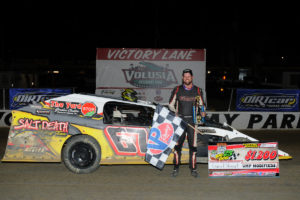 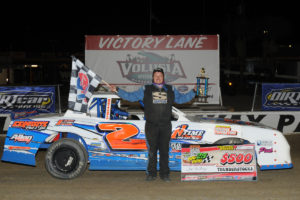