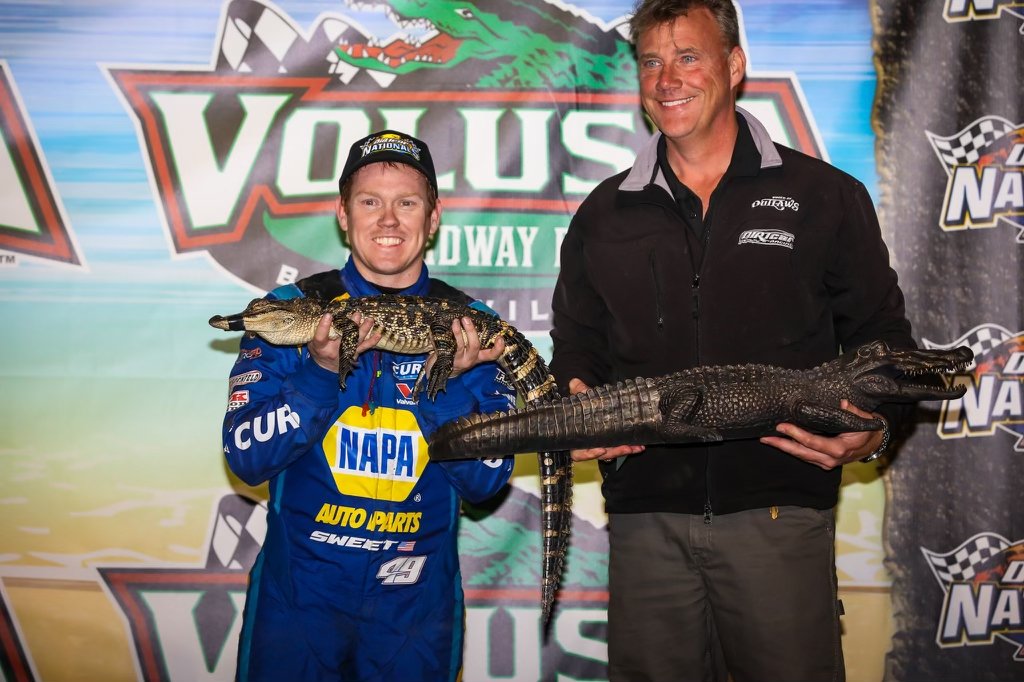 Each February, racers of all disciplines descend upon Volusia Speedway Park to compete for one of the most iconic trophies available: The Big Gator.

Be it World of Outlaws Sprint Cars, World of Outlaws Late Models, Super DIRTcar Series Big Blocks, or DIRTcar UMP Modifieds, the goal is the same. Take a stroll through any legend’s trophy room and the DIRTcar Nationals Big Gator remains one of the coolest, most unique awards in all of dirt racing.

As such a special prize, these big guys don’t just go to the basement and collect dust. They’re centerpieces at the core of any room. So, where exactly do some of the Big Gators end up? We talked to six superstars to find out where they are today.

Nick Hoffman went beyond collecting a few gators or establishing a gator family, he built an entire gator farm. The single-most dominant force in the DIRTcar UMP Modifieds division, Hoffman has earned more than 20+ of the iconic Volusia trophies. His seven Big Gators have been enough motivation to build a new office and new home for all of them, with more to come.

“I’ve got so many that they’re spread out all over the place right now,” Hoffman said with a laugh. “I’ve got some in my office, some in my living room, and others at some different sponsors shops. I’m currently building a new office and I’ve got it all planned with shelves on the wall, one for all of my Big Gators.”

Daryn Pittman owns more Big Gators than any other driver in World of Outlaws NOS Energy Drink Sprint Car Series history. His first DIRTcar Nationals championship in 2013 went back to Kasey Kahne Racing, but his two most recent titles in 2015 and 2019 are on constant guard watch at home. Those two Big Gators sit on the floor sandwiched between his 2003 Historical Big One and 2008 Kings Royal trophies, and protect his 2013 World of Outlaws championship award, which is right above them.

“It’s no midget in my dining room, but it’s the best I got,” Pittman kidded. “I always get a kick out of seeing those two Big Gators on the floor, guarding all my other trophies. Some of my most prized possessions and special moments of my career are all there in that room.”

Brandon Sheppard started collecting gators in 2017, and has since become the fiercest hunter in all of the World of Outlaws Morton Buildings Late Model Series. His most prolific year came in a record-setting four-night run at the 2019 DIRTcar Nationals. B-Shepp won every single World of Outlaws show and easily scored the overall title, snaring up a family of five gators in just about 96 hours.

“We kept the whole family together actually,” Sheppard joked. “They’re all in the trophy room together at Rocket1 Racing headquarters. We’ve got my two Big Gators in there, plus Josh [Richards] won four of them too. A lot of little gators in that room as well, but the Big Gators are by far the coolest.”

The Georgia Bulldog Shane Clanton has found plenty of success in his days at the DIRTcar Nationals. In fact, he has six gators in total, all sitting in a small shrine in his house; a testament to his love for and success at Volusia.

“I made a gator pond out of them,” Clanton commented. “They’re all sitting in my mancave looking at each other.”

When it comes to the Super DIRTcar Series, Matt Sheppard has been king of the Big Blocks at Volusia of late. His eight feature wins and three Big Gator championships are some of his most memorable moments in the Savannah, NY native’s legendary career.

“I kept a few of the little gators, but everyone loves them so I gave a few away to fans and crew members,” Sheppard noted. “I’ve got a big trophy shelf across the top of my shop and there’s a Big Gator up there along with some of the stuffed animal gators. I’ve got one of the big bronze ones on the floor and the kids are always intrigued when they see that. I remember we always strapped it into the front seat for the ride home to be safe.”

For Paul McMahan, his 2014 DIRTcar Nationals title came via the consistency of a 3.75 average finish with two runner-up results in his CJB Motorsports No. 51. He has yet to score a feature victory at Volusia, so the Big Gator sits in his office as his lone connection to the Barberville, FL half-mile.

“It’s a really cool tradition they’ve built with all of the gators given out,” McMahan said. “I see mine almost every day, it’s right there in my office at home up on a shelf. It’s really neat to look up and see that big, long golden gator. I’ve got it right next to one of the slot machines I won at Las Vegas. I’d put it up there with my Brad Doty Classic cup and the Williams Grove checkered flags as one of the coolest items I’ve got at home.”

When the 50th DIRTcar Nationals begins next week on Tuesday, February 2, a whole fleet of 30 gators will be waiting for their relocation. In all, 25 feature events will be contested with little gators as the top prize. Only five Big Gators will be given out to the respective point champions of Sprint Cars, Late Models, Big Block Modifieds, and UMP Modifieds, which also awards an additional Big Gator in the Gator Championship race.

Fans can buy tickets and packages for the 50th DIRTcar Nationals (Feb. 2-13) by CLICKING HERE.