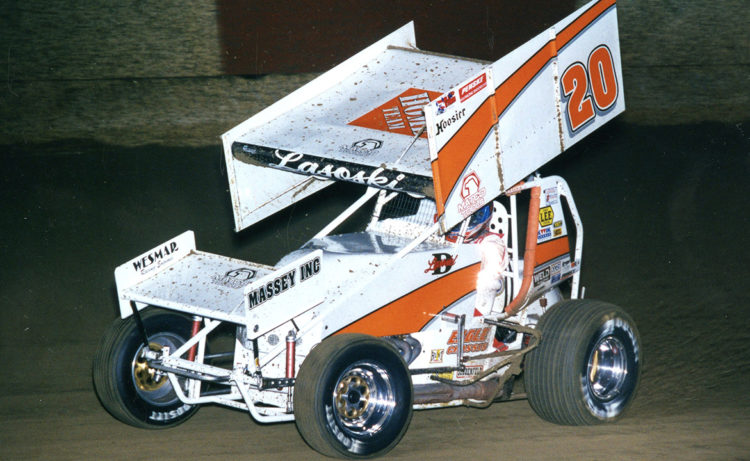 They were so preoccupied with whether or not they could, they didn’t stop to think if they should… In all honesty, they didn’t care.

The pair – Lasoski, a soon to be champion, and Russell, who recently started Eagle Chassis – engineered a car that made the rule book sweat. The frame was offset to the right, the cage was taller, the A-frame was moved back, the engine was off-center, the body was aero-focused and there were a few other features Russell said he’s “not at liberty to talk about.”

By the words of the rule book – or lack thereof – at the time, the car was legal.

“I like to go gray with everything. Even back in the day because (World of Outlaws founder) Ted Johnson was always on my ass about it. I was always trying to get an advantage. Every time I would come to Florida each year, I’d work all year to get an advantage. With this car, it was like, ‘Hey, man, we’ve got a clean sheet of paper. Let’s put a car together that is so obscene and so out of the box that you would never think to do that we know they’re going to scream to high heaven about doing it, but there is nothing in the rule book that says you can’t do it.’

Russell started Eagle Chassis in 1998 after spending about 10 years at Maxim Chassis. Lasoski, a long-time friend, was one of his first customers. When Lasoski teamed with Tony Stewart/Curb Agajanian Racing for the first time in 2000 to bring a car to Florida for eight nights, he and Russell concocted the idea for their mad creation.

“It was the best handling car I ever had,” said Lasoski, who has 19 wins in total at Volusia. “I couldn’t do anything wrong. That’s how superior it was. We raced against a lot of good guys.”

As expected, though, the car didn’t avoid controversy. They had to cut body panels off the first night and throughout the week, according to Russell.

“It really and truly wasn’t the body. We were just hiding other things in it that they couldn’t see,” Russell said.

After Volusia, Lasoski continued his dominance in the unique #20 car during four nights of racing at East Bay Raceway Park. He won three of the four events and finished third in the one event he didn’t win. According to Russell, the reason they didn’t win the one race was due to an engine issue.

At the end of the eight nights in Florida, Lasoski returned to his full-time World of Outlaws ride with Roth Motorsports and Russell hung the car in the ceiling of his shop. He didn’t have room on the ground for it, but mainly he didn’t want people looking at it.

Some people still tried to copy the car to Russell’s amusement. He knew they didn’t know what they were trying to copy, he said.

The car stayed in Russell’s ceiling for the rest of 2000 and the majority of 2001. They brought it back done for the last handful of World of Outlaws races in 2001 as Lasoski competed for his first championship with TSR.

“I took it back down, put a new body on it and he actually finished the last six or eight races with that car and ended up winning the points championship with it (beating Mark Kinser by 30 points),” Russell said. “It was a good car.

“It was more of a head game than anything. That’s why we took it out of the ceiling and put a body on it. Then, after he won the points championship, we brought it back and hung it in the ceiling again for another eight years or so.”

The car now resides as an iconic artifact in Tony Stewart’s car collection. Russell gifted Stewart the car since it brought him his first World of Outlaws championship as an owner.

By today’s standards, the car is far from legal. However, life found a way for it to live on. Elements of the car, such as the taller cage and more aero-focused body, became common-place throughout the years.

“It was way ahead of its time,” Lasoski said.

You’ll now find Lasoski going for wins during the 50th DIRTcar Nationals at Volusia Speedway Park as a mentor for 20-year-old Mason Daniel. You can get tickets to the event by clicking here.