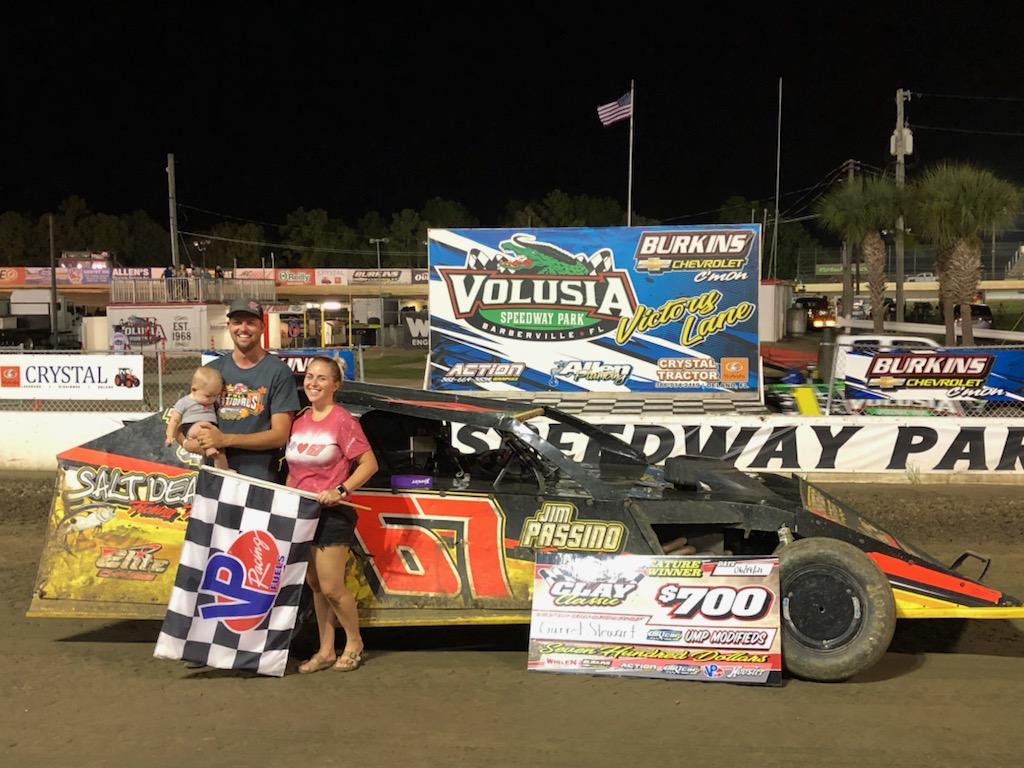 The Florida sun was shining bright as fans arrived for the running of the Clay Classic. Five classes were set to do battle, and as always, the fans got a great show.

The DIRTcar UMP Modifieds kicked off the night’s feature events with a 16-car field running 20 laps. Garret Stewart started inside of row two after the redraw and quickly found his way to the front. Veteran racer Buzzy Reutimann and Dillon Buhr battled through the early stages of the race for second position, but Reutimann exitted the race with a right front flat on lap 12. After the caution Josh Sanford moved up to challenge Buhr for second, but nobody had anything for Stewart as he went on to win with Buhr finishing second and Sanford third.

With the victory lane celebration cut short due to rain in the area we moved right into the 602 Late Model Feature event. The drivers knew the rain could shorten the race, so everyone was ready and willing to make big moves early. Landon Lungren was the early leader, but Dustin Carter was on a mission to get to the front and with a big move on the outside of turns three and four he took the lead and never looked back, winning the race and banking $1000!  Joe Belkey finished second, and Robert Vaughn brought his car home in third.

The Street Stocks were ready to go next as rain still threatened to end the night’s racing. Chris Lawrance was in search of his 100th win and took the early lead, but on lap two Bubba Christian took the lead. A wreck on lap five brought out the caution and with lightning in the area we entered a brief delay. Once the lightning cleared the area and we got the race back underway, Bubba Christian resumed control and led the rest of the race to the win with Thomas Hill finishing second and Rick Osteen finishing third.

With rain no longer a threat the ¾ Mods took the track for their 15-lap feature event. Jesse Powers put his car out front early with Timmy Hogan in hot pursuit. As they approached lapped traffic Powers was able to clear the car of Stephanie Mathis, but as Hogan tried to clear she turned directly into his path causing damage to both cars. Neither were able to continue. When the race went back green Powers assumed the lead and held off the challenging Patrick Vareika to win his first ¾ mod feature event.

The final feature event of the night was the $750-to-win Thunderstocks. Scotty Kay Jr took the early lead, usually the safest place to be, but in this case a lapped car turned into his path trying to exit the track collecting Kay Jr. Fortunately Kay Jr was able to continue and remained the leader though his car was heavily damaged. Joe Belkey took advantage of the caution, and a side-by-side battle was on for the remainder of the race between him and Kay Jr. Each would lead laps, but when the checkered flag flew it was déjà vu for Belkey for a second week in a row losing the Thunderstock at the line by a nose, this week to Kay Jr.

Join us next week for the Short Track Shootout on Saturday Night right here at Volusia Speedway Park!