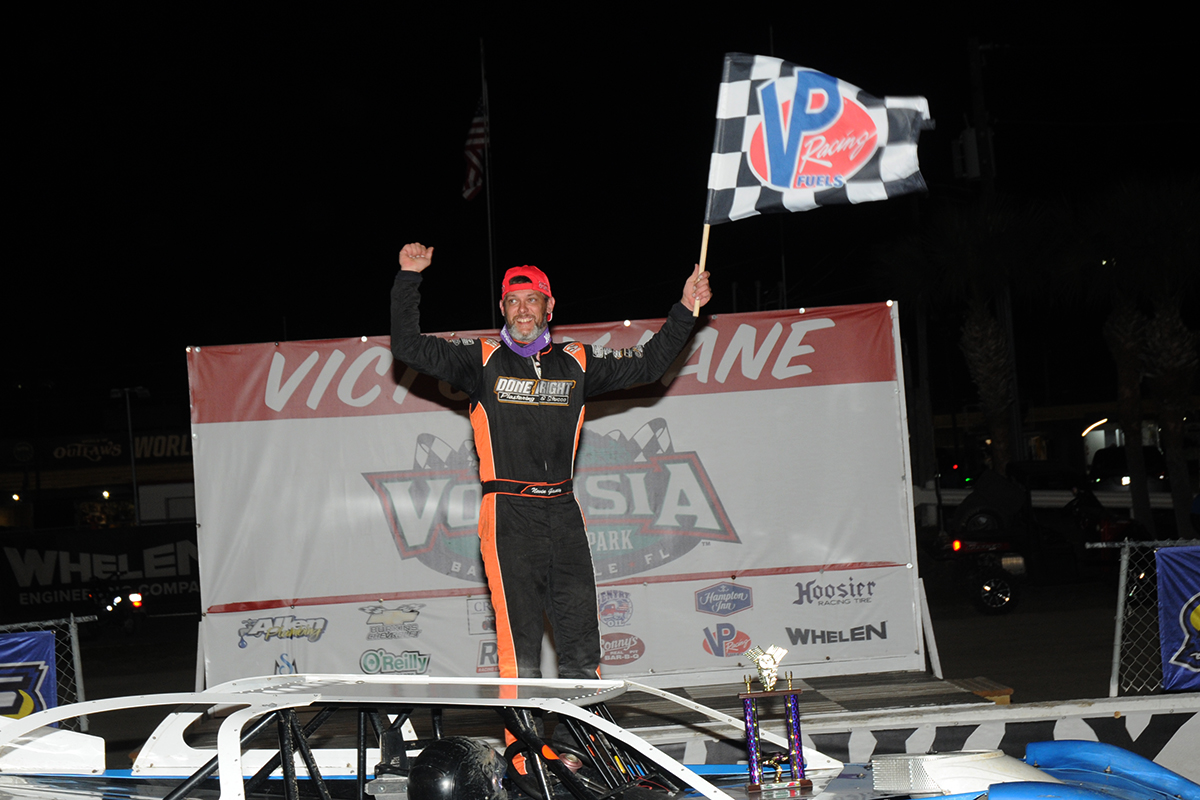 This year’s running of the Work Force 25 included a full moon on the rise, which meant a series of cheers, surprises, and chaos to a classic Easter weekend race. Not only that, there are some new faces and continued leads in some of the championship standings as race three of the 18 race season comes to a close.

In the 602 Late Models, it was a young gun show as both Jackson Hise and Trynt Lloyd battled it out through the 20 lap feature. The duo faced many challenges to their front running skill, including Mikey Kopka and Mark Steube. In the end, it was Hise that edged out Lloyd. This now puts him right in the battle for the points lead with Lloyd, Steube and Brad Fender Jr. The 3/4 modifieds has a new face in a championship, and he’s got a lot cooking in the pot. Young Korbin Minchew got the feature win after a race riddled with cautions and chaos. Along with that, the modifieds also gave the Volusia 2022 season it’s first big one. A five car wreck that included the Shaffer duo of Wray and Wryan, defending champion Wade Olmsted and Dustin Peterson cut the competition down to just two big front runners; Minchew and Timmy Hogan, last week’s feature winner. Hogan used up all the track he could to pass Minchew, but didn’t pan out in the end. Don’t be surprised at all if they battle for the championship like they did to each other respectfully tonight. The 604 Late Models was a tough challenge, but included a win from Nevin Gainey that went wire to wire in the Work Force 25 Main Feature. He had challenges all throughout the 25 lap feature, with guys like Jeff Choquette, Derike Bennett, Trynt Lloyd, again, Mikey Kopka, and Dustin Carter all making up the front running crew of the night. Though the battle for the championship is still wide open at this point, there might be some clear favorites come the end of the next race, the Sunshine Showdown. The Thunder Stocks keep on producing, and tonight did not disappoint whatsoever. At the drop of the green flag, polesitter Justin Reynolds and heat race 2 winner Patrick Thomas battled in the early portion of the 20 lap feature. In the midway portion, it became clear that the top 3 favorites would be Reynolds, Thomas and Bubba Roling come time to throw the checkered. All of a sudden with five laps to go, Josh Byrd came into the picture. What seemed like out of nowhere, Byrd had strong momentum to clear both Reynolds and Thomas as he set his sights on the leading car of Bubba Roling. With one lap to go, Byrd was on Roling’s bumper, went low, cleared him off of turn 4, and stole the win after coming into the picture so late in the race. In his interview, he described how long it has been since his last win, and hopes it can continue his fast-paced momentum towards a Thunder Stock championship. Surprisingly enough, tonight was the Street Stock’s first race of the 2022 Volusia season. However, the long awaited beginning was all worth the wait with how the race had played out. At the start, it was Alan Peacock gaining the early lead. As the race progressed, it became clear that Rodney Wright would be the one to gap the field and win. Donnie Ashford and Bruce Griffin were battling for 2nd for the majority of the race, which gave Wright a good gap. Then, Ashford cleared Griffin. He closed the gap quickly and with one to go, Ashford passed Wright to give him the first win in the 2022 season. All around great racing in this class could make it a highly contested championship fight come November. The next race for Volusia Speedway Park will next Saturday, April 23rd at the Sunshine Showdown. Gates will open at 4:00, with Hot Laps at 6:00. Can’t make the race? Watch the broadcast of all the action live on DIRTVision. We’ll see you then!