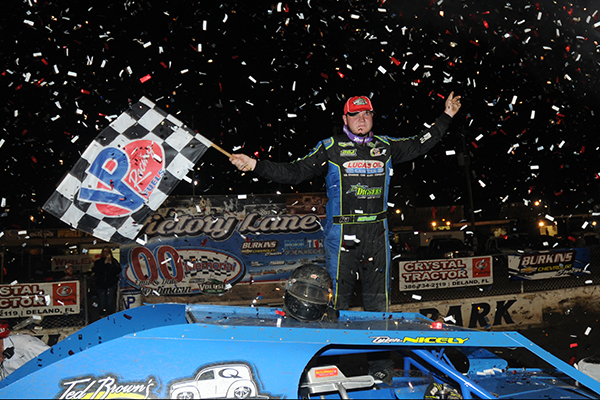 Tonight was all about the Reutimann family and specifically remembering the lives of Emil and Dale Reutimann. With Buzzie and David already in the race, all that was left to run were a couple of Last Chance Showdowns and then onto the 50-lap main event.

The night’s opening ceremonies celebrated Emil and Dale’s memory on the stage of the front stretch and then went straight into a redraw that put Devin Dixon on the pole for the Feature. Before this could be run a pair of Last Chance Showdowns determined who else was in and who was going home.

The first Last Chance Showdown got off to a rough start with three straight cautions. Finally, on the fourth attempt, pole-sitter and eventual race winner Kenny Wallace led the field to a string of green flag laps. Three more cautions came out and when the final checkers flew Kenny Wallace, Jason Garver, and Todd Neiheiser transferred to the Feature.

The second Showdown saw the No. 1S of Brian Shaw making big moves to come to the front after an 11th place start. Shaw came all the way to third, finishing behind the winner, Brandon Wells, and second place Eric Moon to punch their tickets to the big show later in the evening.

The 50-lap Feature event left seats unused for the first portion of the race. From the driver introductions on the front stretch, to the four-wide salute, this show kept fans on their feet.
Pole-sitter Devin Dixon led the opening laps but by lap 22 had lap times slowing while other drivers were surging forward. Just before halfway Tyler Nicely once again found himself leading a race as lapped traffic issues slowed Dixon, allowing Nicely to catch him and make the pass. This pass cost Dixon an extra $500 as Nicely won the halfway leader award and banked an additional $500.00 on the weekend.

As the laps rolled on it was clear once again Nicely had the car to beat. Though Justin Allgaier was able to get past him a couple of times Nicely was able to gathered it up and find a way back to the lead. When Nick Hoffman joined the battle late in the race it looked as if he may have had a little something for the leader, but it wasn’t to be as Nicely went on to take the win and bank another $5,000.00 on top of his already bountiful weekend earnings. Allgaier came in second, and Hoffman brought it home in third. Rich Pratt took the Hard Charger award, worth $250.00.

The SS Shan Smith Sails to Another Victory

The Florida Late Models were back for another round at Volusia Speedway Park this weekend. The 27-car field started the first of three Heat races with a familiar face out front. 12-year-old Trey Mills won Heat one and looked to be the car to beat once more. He was followed in second by last night’s Thunder Stock winner, Jared Allison. Heats two and three were similar affairs with Nevin Gainey and Jeff Choquette taking wins.

The 17SS of Smith started on the outside pole and never looked back in the Feature. Choquette mounted several challenges after cautions closed the gap but was unable to take away Smith’s position. Smith went on to win and bank $1500.00, while Choquette settled for second.

Taking Home the Lyon’s Share of the Prize Money

Patrick Lyon’s #01 Street Stock isn’t only a good looking car, but a very fast one too. His competitors learned this the hard way tonight as Lyon ran away in his Heat race and continued the trend in the Feature. Shane Nichols and Joe Belkey both had brief stints out front, but when all was said and done the Lyon couldn’t be tamed and he went on to win and collect $750.00 for his night’s work.

Up Next at Volusia Speedway Park