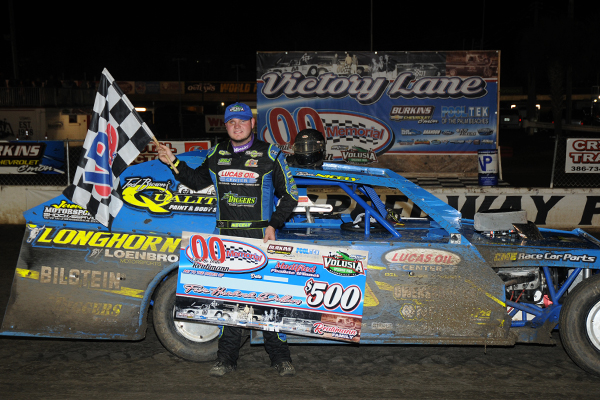 Night one of the Emil and Dale Reutimann Memorial started off with some sprinkles, but it surely didn’t dampen the spirits of the racers who traveled from several different states to be a part of this event.

The racing kicked off with the DIRTcar UMP Modifieds taking the track for their Hot Laps/Qualifying. Three flights of cars went after the bonus money for the Fast Time, and when all was said and done Tyler Nicely topped the field with his lap of 18.740, banking $250.00 before the features ever got under way.

Other special awards, such as the longest haul, were awarded during the opening ceremonies following Qualifying. Mark Rhoades, who towed from West Chicago, Illinois, took home $500.00 for his long haul, Rich Dawson took home $250.00 for the best appearing car, and Qualifiers 2-4 also took home a little extra cash.

When it came time for the four Showdown Features, there was more than just a $500.00 check on the line. Only the top five transferred, leaving many to run Saturday’s Last Chance Showdown to try to gain a spot in the field. Justin Allgaier won the first Showdown with contenders like Stremme and Hoffman filling transfer spots. Kenny Wallace ran a strong sixth, but with only five transferring he will have to try again tomorrow to make the field.

In Showdown number two Devin Dixon punched his ticket to the big show with local drivers like Rich Pratt gained a spot in the field as well. Mark Rhoades, the longest haul winner, will have another long road ahead as he finished 13th and will have to come from the back tomorrow to earn a spot in the field.

Showdown number three saw fast qualifier Tyler Nicely getting the job done again, holding off an early charge from David Reutimann and a late-race effort from Mark Varnadore to score the win and take home another $500.00, bringing his bank role to $750.00 on the night leading up to the big race and making it known he is the man to beat this weekend.

In the fourth and final Showdown, local hot shoe Garrett Stewart squared off against Jeff Matthews, with Matthews taking the win and Stewart a close second. Fan favorite Buzzie Reutimann raced his way into the big show with a fifth place finish, holding off Dillon Buhr for the final transfer spot.

The 602 Late Models were back in action this weekend with a 21-car field. Clay Harris, whose night started off on a bad note with engine problems in his modified, made the most of things, winning his heat race and leading every lap of the Feature with lap times nearly a half-second faster than his nearest competitors. With just he and a single crew member with him tonight, Harris scored a big victory for the Wilkerson Farms-sponsored ride.

Mikey Kopka, who won  his Heat race, ran strong all night, but late race issues would lead to an 11th place finish, while Dustin Carter moved up to finish second. Last weeks winner, Trey Mills ran an impressive third, swapping positions back and fourth with the best in the business. Other notable drivers like Jackson Hise had a disappointing night as a right front flat tire dropped him to the back of the field and he later had to pit again with car trouble.

One for One in Thunder Stocks

Jared Allison had never driven a Thunder Stock before tonight, but that didn’t stop the Late Model driver from jumping in the car and giving it a shot. He finished third in his Heat and start sixth in the Feature behind cars most would bet on to win. Boome Canary won his Heat and led a good part of the Feature before car troubles took him out of contention, and Jason Garver proved duct tape numbers don’t mean you aren’t going to be fast are always hard to run with, let alone beat.

Allison battled early with veteran Kevin Durden for position, eventually finding his way to the lead on lap ten. In a race that saw cars on top of cars, lead cars making mistakes and taking cars with them when they went, and utter chaos at times, Allison picked and clawed his way to the front and is now one-for-one in his Thunder Stock racing career.

Saturday is the Emil And Dale Reutimann Memorial. Hot laps start at 5:45 with racing to follow. It will be a big night of racing with a 50 lapper, Last Chance Showdown, and Street Stocks along with Florida Late Models on hand to round out the show. Watch every lap LIVE on DIRTVision.