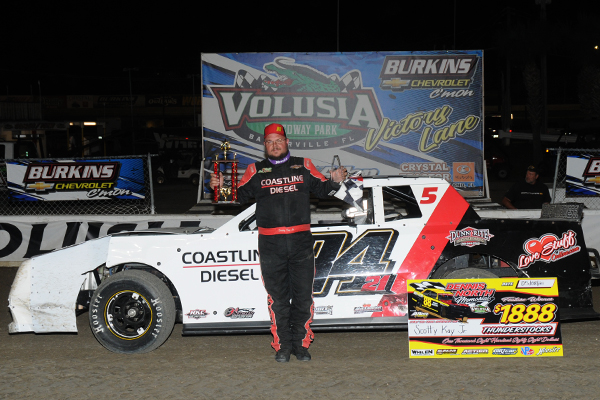 Saturday night was a night filled with first wins, great racing, and much more. The night celebrated the memory of Dennis North as well as the birthday of Buzzie Reutimann. Emotions always run high on race day, and this day would be no exception. From tears to cheers, we saw it all.

The 604 Late Models kicked off the night with a 20-lap feature event and $1000 on the line to the winner. The race was littered with cautions early as drivers sorted out positions on the track. Joe Kump started on the pole and led until lap five when Johnny Collins used the outside line to take the lead. Kump suffered a flat right rear tire and fell out of contention while Mikey Kopka moved up to second and Branden Wells to third. The race finished under a long green flag run and the order would stay the same with Collins grabbing the win.

The DIRTcar UMP Modifieds were also running for $1000-to-win on the night with fan favorite Garret Stewart starting deep in the field after suffering a flat right front in the heat race. Buzzie Reutimann started pole fresh off of his 80th birthday party with son David starting outside second row. David Reutimann quickly assumed the lead, never looking back and taking the win. Garret Stewart worked his through the field to finish second, and Seth Geary rounded out the top three.

The Street Stocks brought 19 cars to Volusia Speedway Park on Saturday night for what would turn out to be one for the history books. Chris Lawrance started pole and led flag-to-flag holding off early race challenges from David Showers Jr and later challenges from Tim Gay. With the win Lawrance joined an elite group of drivers able to claim a win at Volusia when it was asphalt as well as on the dirt. Gay took home second, Showers Jr third, and Bubba Christian rounded out the top four.

Wryan Shaffer and Korbin Minchew led the 15-car  ¾ Modified field to the green on Saturday night. Wade Olmsted quickly found his way from tenth to first, but a mid-race caution gave Timmy Hogan a shot at the lead and he made the most of it scoring his first win at the World’s Fastest Half-Mile. Olmsted held onto second, and Dustin Peterson brought home third.

The evening’s big event was the Dennis North Memorial, pulling in 36 entries. Tewnty-four cars took the green in the main event after a Last Chance Showdown sent 12 cars home. The 38-lap feature event was led almost exclusively by Joe Belkey, but with less than ten to go Scotty Kay Jr and Jason Garver stepped up the pressure, and with six laps to go they were three-wide off of turn four for the lead. Garver used the bottom line and Kay the top line to get to the front in a side-by-side battle that lasted until the checkered flag fell. When the dust settled Scotty Kay Jr became the first repeat winner of the event with Garver bringing home second. Belkey finished third and Kevin Durden fourth.

Our next event is Saturday, May 15th featuring the Top Gun Sprint Classic. Joining the sprints will be the Street Stocks, 602 Late Models, and 604 Late Models. Come out to Volusia Speedway Park for what is sure to be a great night of racing!