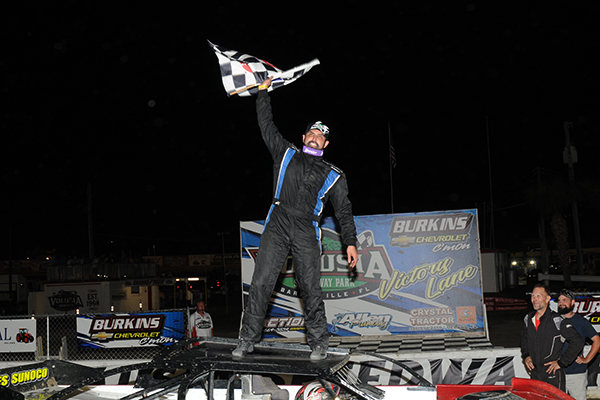 Mother Nature has been the nemesis of Florida tracks this season, but tonight she finally gave us a break. Five classes, a perfect racetrack, and excited fans made this a great race night all together.

The 602 Late Models kicked off the evening with the $1500-to-win Work Force 30-lapper. Early leader Travis Staats looked to be in control until a mechanical failure left him barely able to roll. Dustin Carter assumed the lead and never looked back, at times gapping the field by near half a track. He took the win in a caution filled race that left many unable to finish. Mikey Kopka finished a solid second and Joe Belkey came from the back to finish third.

Next up were the DIRTcar UMP Modifieds. Patrick Vareika and Larry Burkins led the field to green after the redraw. Burkins assumed the early lead, but Dillon Buhr charged to the front on lap four.

The first caution flew on lap 11 when pole sitter Vareika slowed on the back stretch. Lapped traffic had separated the leaders prior to the caution, but with the field bunched up the race for the win had just got a lot closer as Burkins, Stewart, and the rest of the field were back within striking distance.

When the race restarted a side-by-side battle quickly got underway between Buhr and Stewart, each taking turns running the high and low side. Stewart, who started tenth, took the lead for the final time with two laps to go and took the win and $1000. Buhr finished second, with Burkins and Rackley rounding out the top four.

The Thunder Stocks were next to race with Alan Peacock taking the early lead, but on lap two Jason Garver took the top position. Garver’s luck ran out, though, on lap five as his engine officially reached its expiration date.

On the restart David Showers Sr led the field to green with Dustin Turnage Jr and Joey Haslauer close behind. Showers led the rest of the race  and took the win with second going to Peacock, who picked his way thru the field from seventh place putting on a great show along the way!

The Dirts4Racing ¾ Mods were the fourth class on track for their feature event with fifteen cars taking the green flag. Robert Fleming Jr and Dustin Peterson started on the front row with Peterson leading lap one. That lead wouldn’t last long as Patrick Vareika took the lead on lap two never looking back. The biggest mover of the night was definitely young Wade Olmsted, who came from thirteenth to second!

Last out were the Dirts4Racing Street Stocks. David Showers Jr took the early lead, followed closely by Tim Gay and Tuck Trentham. Showers Jr and Gay battled side by side for several laps with Gay finally getting clear out front. Showers continued to challenge, but Gay held on for the win banking $750.

Our next race is the Dennis North Memorial on Saturday, May 8th. The 604 Late Models, DIRTcar UMP Mods, ¾ Mods, Thunder Stocks, and Street Stocks are on the Schedule. Don’t miss it!