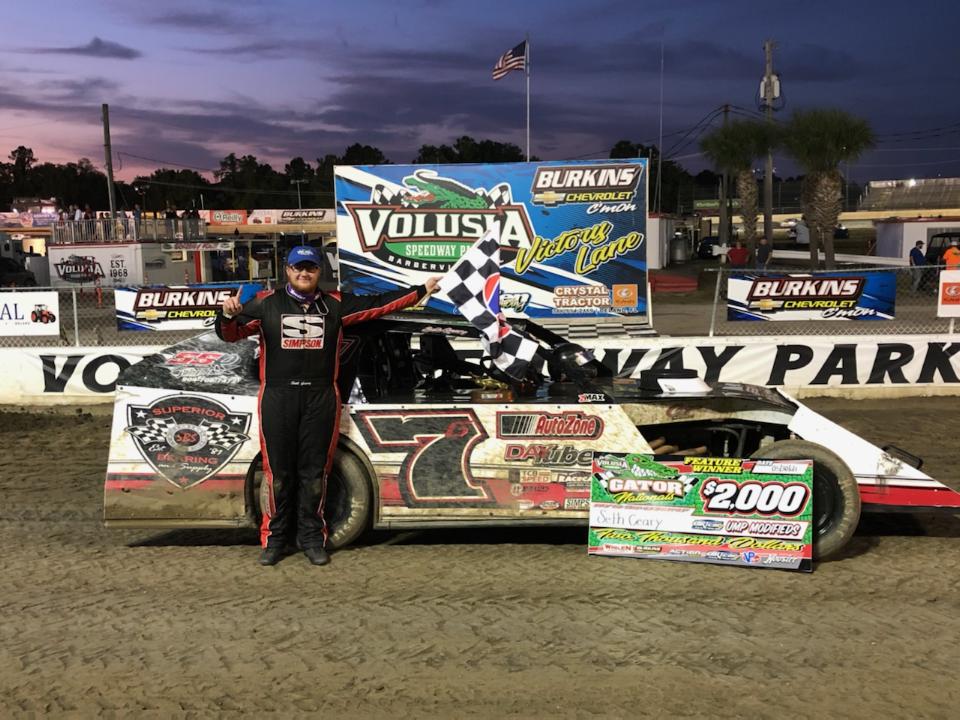 After a soggy start to the weekend with a rainout on Saturday night, the Gator Nationals finally got underway on Sunday evening. Five classes of racing took to the track to do battle on this Memorial Day Weekend, and as expected the show kept fans on their feet all night.

The feature events kicked off with a 20-lap DIRTcar UMP Modified race and a $2000 winner’s purse. Seth Geary started on the pole and took the early lead. Garret Stewart charged thru the pack from his seventh starting position to second, and after a caution with five to go he got his chance at Geary. On the restart Stewart pulled to the inside of Geary and the two raced side-by-side for a couple of laps, but Geary was able to pull back ahead at the white flag and went on to win the race.

In the second feature event of the evening the Thunder Stocks took the track for what would be a caution filled race. Young Bubba Roling was the early leader holding off several challenges from seasoned veterans, but on a restart on lap seven Shaun Daugharty used the inside line in turn one to take the lead and never look back. Roling held on for a second place finish, and Charlie Staats finished third.

The third feature of the night was the 602 Late Models. With $1500 on the line we all knew this would be  a good race. Brenden Smith won his heat race and took the early lead in the feature, closely trailed by Mikey Kopka and Dustin Carter. As the race wound down it was clear that Brenden Smith was not going to be caught tonight. He went on to win with Kopka and Carter finishing second and third.

The ¾ Modifieds were the fourth feature of the night. Timmy Hogan took the early lead, while Wade Olmstead and Dustin Peterson put on a show behind him running side-by-side for second. With six laps to go Olmstead took the long way around turn one and two riding the cushion and taking the lead down the back stretch. A caution on the next lap tightened up the field, but once the green flag dropped it was clear Olmstead was on a mission. He went on to pick up his first feature win with Hogan and Powers rounding out the top three.

In the final feature of the night the Street Stocks took the track. An early side-by-side battle between David Showers Jr and Bubba Christian  set up a very fast paced race. Christian took the lead on the third lap and never looked back notching the victory. Chris Lawrance moved up to take second, and Showers finished third.

We thank everyone who joined us this Memorial Day weekend, especially our veterans. Our next race is the Sunshine Showdown on June 12th.