If you thought night two of the Fourth Annual Sunshine Nationals couldn’t be any crazier, you are in for a treat.

Keeping the status quo from last night, Jensen Ford dominated from the moment he hit the dirt at Volusia Speedway Park.

To begin the night, he went fastest in Qualifying Group A, as well as breaking his own track record that he set lat night with a 17.904 second lap time.

In the Feature, he would lead every single lap en route to his second win in a row at Volusia Speedway Park. Not bad for a guy that is making his first trip to the World’s Fastest Half Mile this week.

“Sometimes you go to a racetrack and everything flls your way.” Ford said. “We’ve had great luck and we have a real fast piece, so that helps a lot too.”

The McCarter Brothers Rcing driver also reiterated that this was the type of track that fit his driving style, making Saturday night’s Championship Feature comforting to head into. His strategy; get to the front and stay out there. 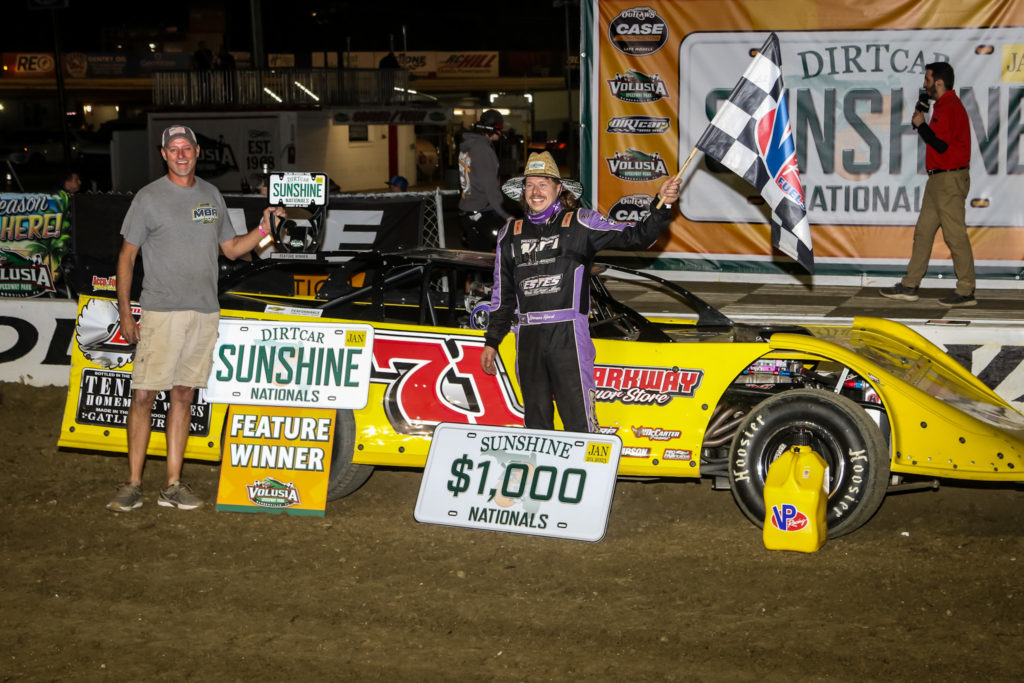 “Just get out front, get clean air, stay smooth and keep consistent laps.” Ford said. “That’s how I’ve done it before, and that’s the idea for (Saturday) night.”

Ford’s team owner, Mitch McCarter has a lot to smile about, with the plan to come to Volusia being formed in November.

“All the guys in November decided that they wanted to bring two cars here.” McCarter said. “They started working and we didn’t have a 602 (Late Model). This car was a 604, so we invested in it to be a 602 and these guys worked everyday since Thanksgiving to get it ready, and it has shown up in results.”

Similar to last night, Jackson Hise finished second again to the #71, however he had to work his way up from the middle of the field to finish in the runner-up spot.

Finishing on the podium would be the JR1 car of Jake Jackson. The Rutherfordton, NC driver bounced around the top five, but ends Friday night with good vibrations entering Saturday night.

Rounding out the top five would be one of Thursday night’s Feature winners, Michael Courtney, and the #515 of Bubba Roling.

The second Feature of the 602 Late Models provided a familiar winner to Volusia, but not in the way you would expect it to be.

At the start, polesitter Nevin Gainey took charge, leading 10 of the 15 lap Feature. On his tail was David Showers Jr, who lurked behind the #17 Ft. White, FL driver until it was time to strike.

That time would come at lap 11 when Gainey was caught behind lap traffic and Showers was able to get around him on the high side.

Gainey suffered a flat tire after making contact in a three-wide battle with Showers and the lapped car, ending his chances of winning.

At the front, Showers would have to hold off fellow St. Augustine, FL driver Trey Mills to bag his first Sunshine Nationals victory since 2020. 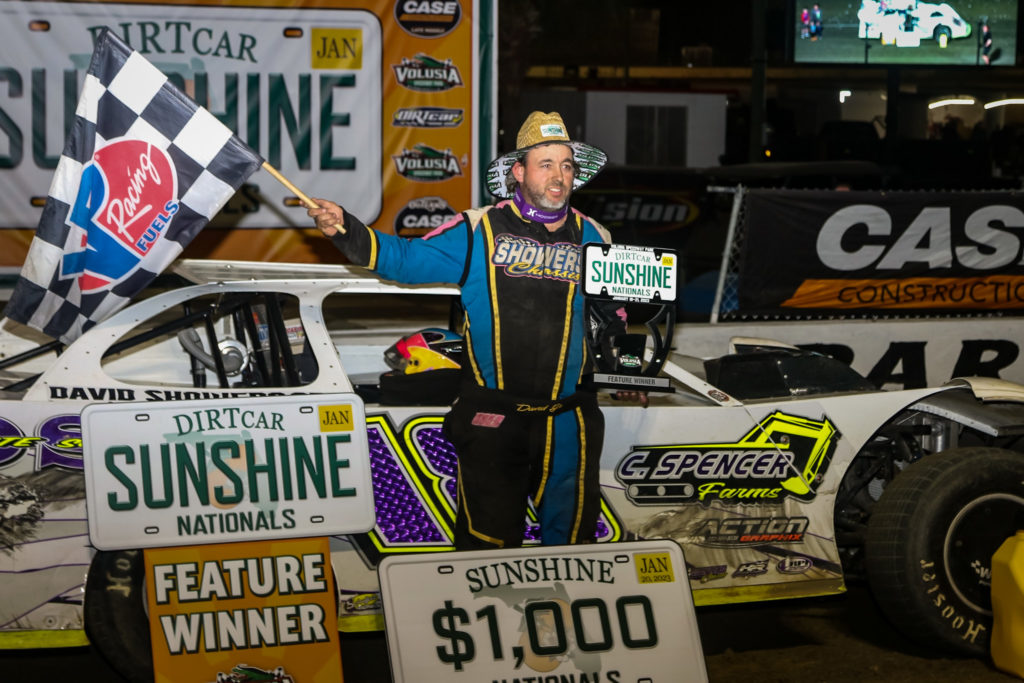 “I had a better understanding of the track when I ran the 604 (Late Model)” Showers said. “It was an awesome race, me and Nevin had good racing until the contact down in (turn) four. You hate to see that, but it’s apart of racing. I could hear Trey (Mills) on my outside so I knew I had to block the outside to win this race.”

The second-place finishing Mills kept a fast pace behind Showers, though will be happy to take the points from tonight to go into the Championship Feature.

Third-place Chaz Haskins of Gray, GA completed the podium after battling fiercely for the spot. Kole Platt would make substantial gains in the points to finish 4th, and Quentin Steedley rounded out the top five.

602 Late Model action continues from Volusia Speedway Park on Saturday night with a $3,000 to win Championship Feature. The top 20 in points accumulated from Feature finishes have been locked in. Those who are below the cut will move into the Last Chance Showdown.

Tickets will be available at the gate. If you can’t be at the track, watch every lap live on DIRTVision.