Event Description
Kick off the 2022 racing season with two full weeks of racing in Florida at Volusia Speedway Park!

Chris Madden knew he couldn’t play it safe Saturday night at Volusia Speedway Park. As the Gray Court, SC driver’s chances to win dwindled, he decided to seize an opportunity.

Madden ran fourth during the first 10 laps before taking a risk that led to reward. He thundered to the top of the Volusia clay, picking off Mike Marlar and Max Blair to get to second. That’s when he set his sights on leader Dale McDowell.

As the Chickamauga, GA driver moved to the middle to pass a slower car, “Smokey” dealt his final blow. Madden switched lanes through Turns 3 and 4, powering under McDowell to take control of the lead en route to winning the DIRTcar Nationals finale, while Devan Moran won the overall Big Gator Championship.

The choice to go to the outside was crucial in Madden’s 33rd career World of Outlaws CASE Construction Equipment Late Models triumph.

“It was very important,” Madden said. “I thought we messed up with an adjustment, and when they dropped the green flag, I couldn’t keep up, and I was like, oh boy, I’m in trouble.

“The racetrack finally slowed down enough to where we were pretty good and [McDowell], and they caught lap traffic, so I had nothing to lose but step out there, and we found the groove and happened to get by right in time.”

Madden’s second career DIRTcar Nationals victory is the culmination of a consistent week for him and his team. He’s now at the top of the World of Outlaws CASE Late Models point standings—16 points ahead of McDowell.

“We’ve had a great car all week,” Madden said. “I’ve made some bad calls on restarts, picking the wrong line, and took myself out of a couple of wins this week. Overall, we’ve had a great week, my guys worked their tail off doing a great job, and I appreciate them.”

Mike Marlar, the 2018 Series Champion, crossed the line second. The Winfield, TN campaigner sat third for most of the race, getting by Rookie of the Year contender Max Blair on the final lap.

“I had a good car; I just couldn’t do much about it there,” Marlar said. “[Blair] was just in my line. I kind of waited until I thought I could pass on tires, and the last couple of laps, I just drove it a lot harder and got him. But I probably never would’ve gotten Madden.”

McDowell finished third after leading early in the race. “The Mac Daddy” felt he was a sitting duck once he caught the back of the field.

“I didn’t know where to go, and I went to the middle,” McDowell said. “That’s where I should’ve been, but [lap cars] moved out a little bit so [Madden] and them shot by me. Some days are your days, and some days aren’t.”

Max Blair, the Rookie of the race, slipped to fourth on the final lap. Despite making a mistake at the end, the Viper Motorsports team is happy to get its first top five of the season.

“Anytime you run fourth with these guys, it’s something to be proud of,” Blair said. “It sucks a little bit when you run second the whole race and then give it away on the last lap and fall back to fourth. But, with how this week went and everything, fourth is a lot better than 18th.”

The Centerville, PA driver leads the chase for Rookie of the Year after six races—10 points ahead of Tanner English.

He isn’t the only rookie who grabbed their first top five, as Kyle Hammer finished fifth. It’s momentum the Clinton, IL driver can take moving forward, on top of leading 20 laps during Thursday’s DIRTcar Nationals Feature.

“This is one of the hardest tracks we’ll probably hit on the schedule,” Hammer said. “I mean, look at all these guys. Ryan Gustin dominates one night and misses the Feature the next. We led half the Feature and missed the next night and take a provisional.

“It shows [Volusia] is a hard track no matter who you are, so I feel like we’ve got a huge confidence booster going into the rest of the year.”

While Madden did everything possible to win the Big Gator title, Moran took it home for the second straight year. “The Mailman” did just enough to win the DIRTcar Nationals championship—besting Madden by one point. 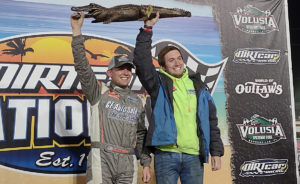 Despite not finding Victory Lane, Moran still made his way to the podium four times at Volusia. It capped off the end to a successful Speedweeks for the Dresden, OH driver.

It’s pretty cool,” Moran said. “We wanted to win so bad here this week, and I felt we had the car too.

“To come out here and get the big gator two years in a row after not racing a whole lot is a lot of fun. I can’t thank Wylie [Moran’s brother and crew chief] enough.”

Chris Madden proved that taking a chance at the right time can pay off on the path to Victory. It’s risks like Madden’s that led to a reward—and a chance to contend for a World of Outlaws CASE Late Models title.

UP NEXT: The Most Powerful Late Models on the Planet make their inaugural appearance at The Rev in Monroe, LA, March 11-12. FOR TICKETS, CLICK HERE.