Going into the summer break in the 2022 Volusia Speedway Park season, this year’s Clay Classic was one to forget for some, but one all will remember. As Elton John once said “Saturday night’s the night I like, Saturday night’s alright”.

In the first feature of the night, the 604 Late Models, it was simply the David Clegg Show. Clegg led every single lap to win the first feature of the night. The driver stated in his victory interview that he missed the setup completely at the Outlaw Shootout and wanted to get back to the basics. He did just that and put on a clinic to win the feature. From the initial green flag to checkered, the 07 was top of the leaderboard with no hesitation or vulnerability shown by the driver.

Second place went to Joe Kump after staying consistent in the top three the whole night and Sonny Thompson rounded out the podium. 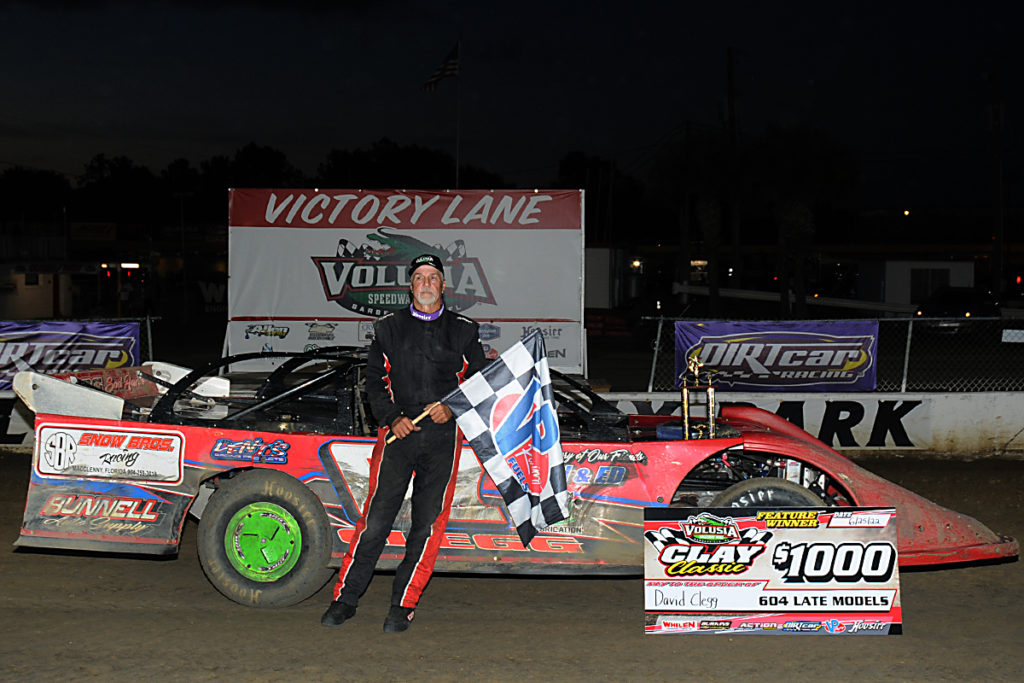 The 3/4 Modifieds have had four different drivers win in the last four races. Korbin Minchew, Timmy Hogan, Patrick Vareika and new to the list was Korbin’s brother, Lawton.

The 23L of Lawton Minchew has come oh so close to winning this season and waited for him to finally have his chance to end up in Volusia Victory Lane. Minchew started from the outside of row two and quickly used the high line to his advantage. He quickly made it around the front row of Wade Olmsted and Jesse Powers to lead the rest of the 15 lap feature. He also had to put up with Timmy Hogan giving him pressure throughout the feature, but never relinquished the lead.

However, the night didn’t go so well for points leader Korbin Minchew. He started 9th, spun on lap three and tried as much as he could to salvage what he could from the night. What was Korbin Minchew’s loss was Timmy Hogan’s major gain in the points running. 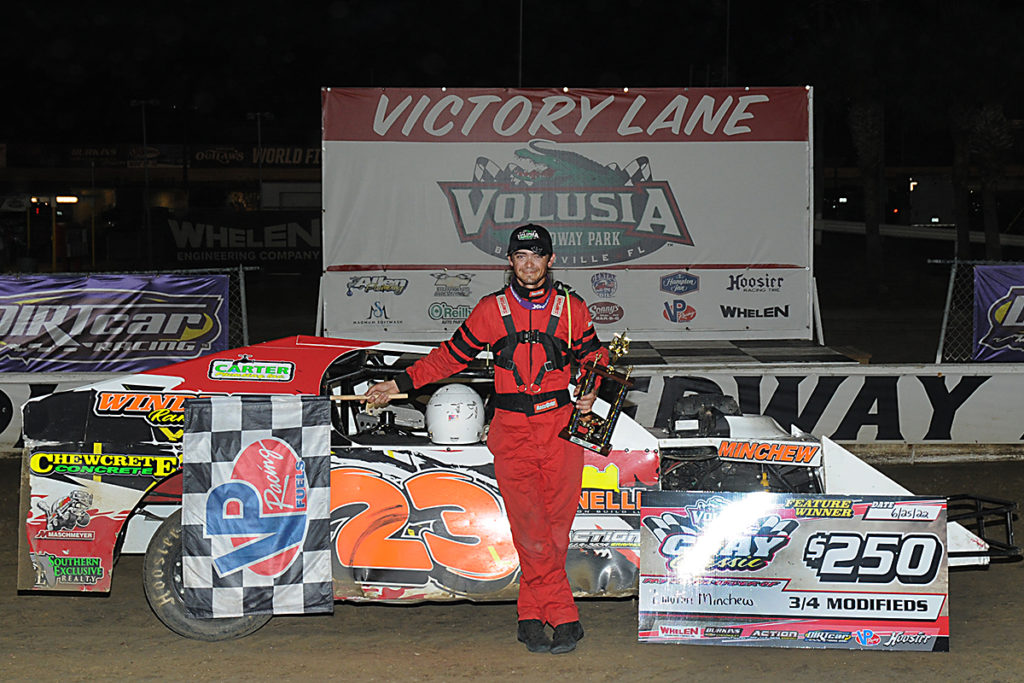 The 602 Late Models was one that some drivers won’t look fondly upon as the season heads into the summer break.

Throughout the 20 laps of the night, the race was controlled by the 25 car of Donnie Chappell. Though, he had company behind him with the 1A of Mikey Kopka, the 5 of Jamie Green and the 44P of Kole Platt in tow.

The race was Chappell’s to control as he had led the night since grabbing it from Kopka and polesitter Tim Swartz.

A late race caution with two to go set up a green-white-checkered race to the finish. Coming to the line, Kopka stayed on Chappell’s bumper all the way into turn one. Kopka sent it low, made contact with Chappell and sent the 25 machine spinning at the top of turn two. Just like that, it was leader to wrecker for him. The fireworks weren’t over just yet, with Chappell climbing out of his car and threw his HANS device at the 1A. Not only that, Kopka would be sent to the rear of the field for causing the wreck, killing his hopes of winning the feature.

At the front, it would be Jamie Green and Kole Platt to battle it out for the feature win. Green got a good jump on the restart and Platt would never be able to close in, giving Green his first win in a 602 Late Model at Volusia Speedway Park. 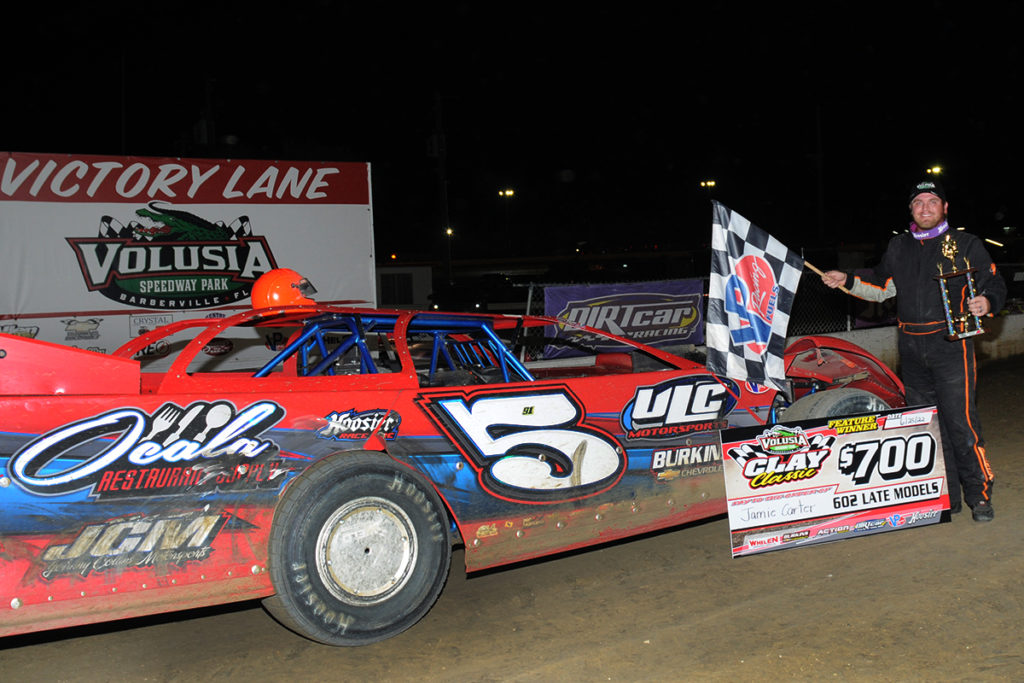 The DIRTcar UMP Modifieds was once again a battle between the two title contenders of Seth Geary and Garret Stewart. It may also be the battle we expect to see more times until the finale in November. Geary started on pole while Stewart started back in 4th. It wasn’t the best of starts for the 67 as he struggled to find room and chances to pass other contenders like Hunter Gustafson and Dalton Lanich.

Once he did get around Gustafson and Lanich, Stewart closed in on the 7 of Geary. A much more competitive and cleaner battle between the two emerged as they both ran side by side for multiple laps until Stewart finally cleared Geary with two to go. Stewart’s win ties he and Geary in wins with three and tightens up the points ever so slightly. 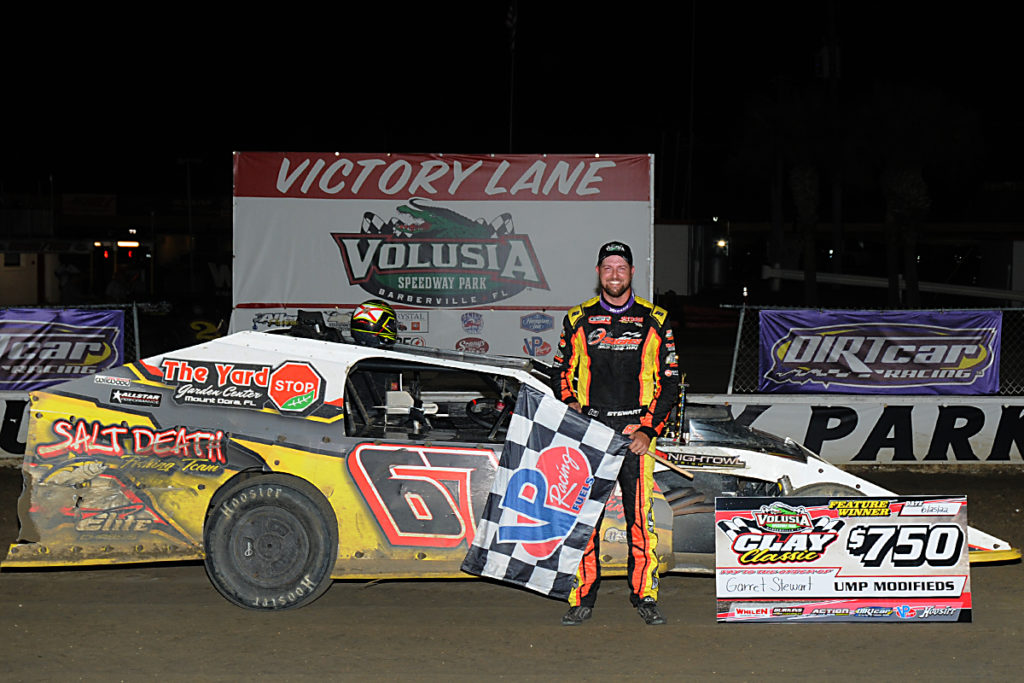 Lastly, the Thunder Stocks was once again a Joe Belkey clinic. Starting from the pole, the driver of the 2 led every lap after challenges from both Shaun Daugharty and Curt Spencer. There was also lots of action everywhere around the track with multiple cautions being thrown. Belkey held off the field even with the cautions and racked up his second win of 2022. 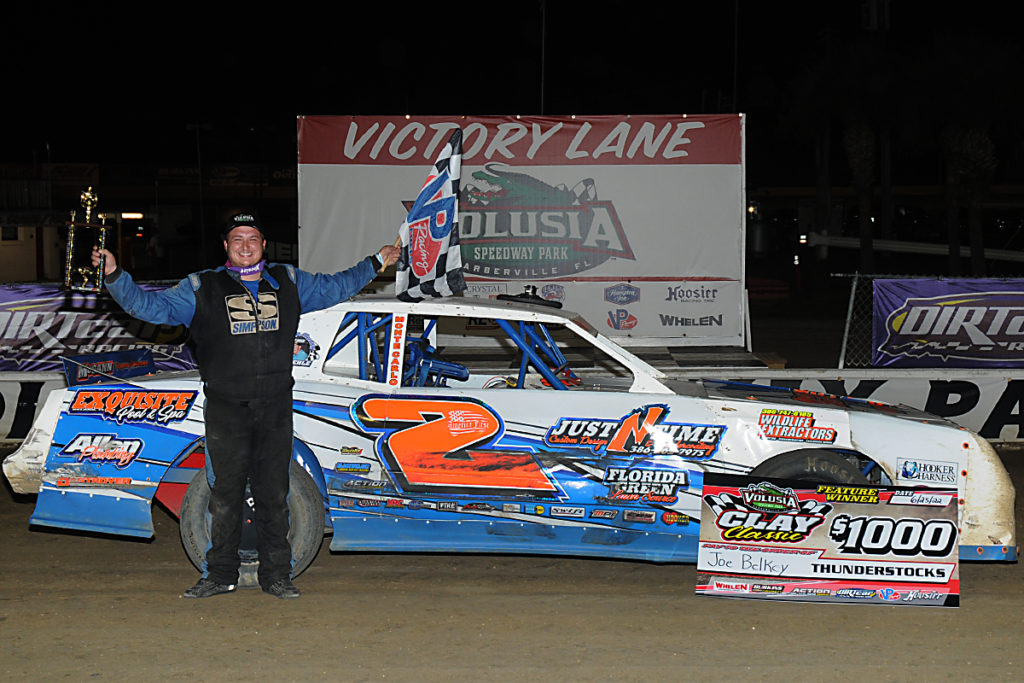 Volusia Speedway Park will be taking a mini summer break. But we will return with the Summer Sizzler on July 16th. It will feature the Top Gun Sprint Car Series as they make their second trip to the track in 2022. Follow us on Facebook, Twitter and Instagram or visit volusiaspeedwaypark.com for more information on these races to come.