With a race name like the Outlaw Shootout, the night lived up to what it was supposed to be.

After chaos, slide jobs and surprise moves to win, it was a night many drivers will and won’t look fondly upon as the 2022 season hits the halfway mark.

To start the night off, the 604 Late Models ran a clean race with close action between the leaders of Brandon Wells, Dustin Carter and Mikey Kopka. The three stayed close to each other throughout the 20 lap feature, and it became a battle until the end. Wells held the challenge off and earned his first win of the 2022 season. 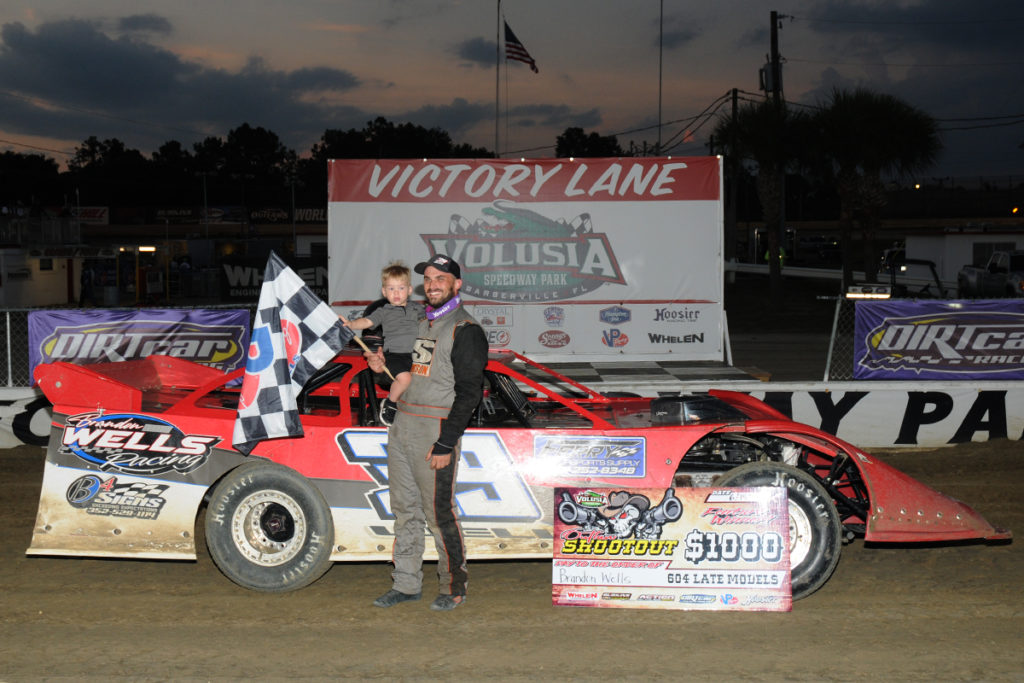 The ¾ Modifieds proved they continue to produce good racing with a return to victory lane for a familiar face.

Patrick Varieka made his first start of the season in the ¾ modifieds and instantly showed he was the man to beat. First by winning his heat race in dominant fashion. Then, he grabbed the lead in the feature early and never relented.

After a late race caution with four to go, Vareika received a challenge from second place running Timmy Hogan. Hogan had the short run pace on Varieka and tried to attempt to pass him for the lead, but Vareika had the long run pace and would help him hold on to win in his return to the ¾ Modifieds in 2022. 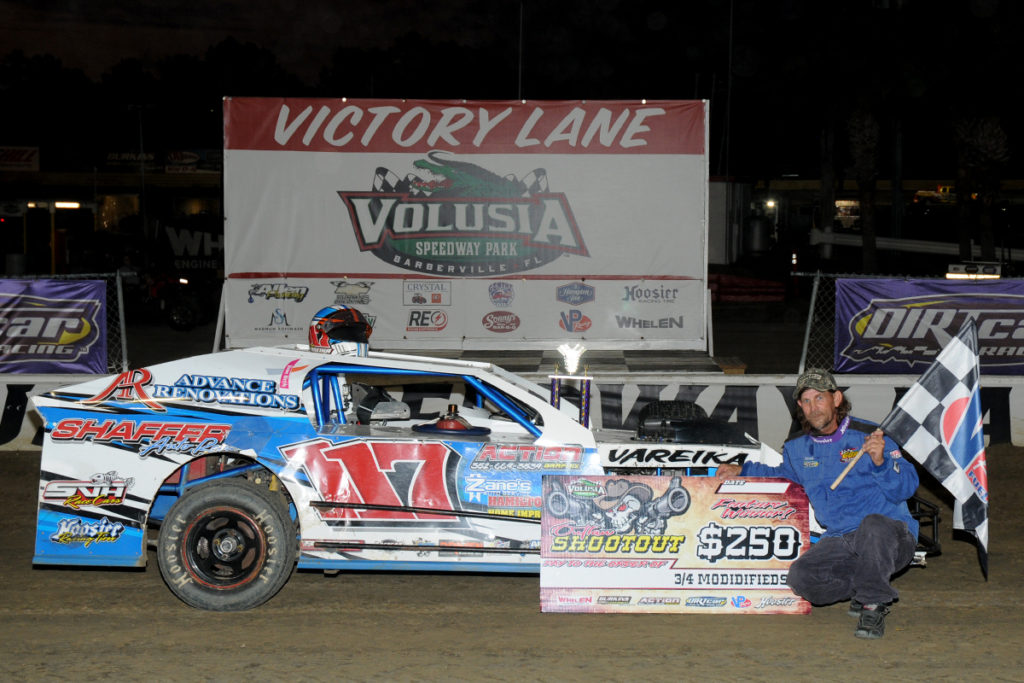 The main show of the night, the $1,500 to win in the DIRTcar UMP Modifieds, showed that even the season’s top competitors can get their hands dirty with aggressive moves.

After a late caution with four laps to go remaining, Geary would have to try and hold off his biggest title competitors on what was the last restart of the night.

On the restart, Stewart sent it deep on Geary going through turns one and two and would even make contact with Geary after speeding off with the lead. Rackley would then fight Geary for second while Stewart cruised to his second win of the 2022 season.

Showing off displeasure on the cooldown lap, Geary pulled up close to Stewart and revved his engine to show he didn’t like what he did to grab the Outlaw Shootout feature win. The win closes the gap in the championship with Stewart now 18 points behind Geary going into the halfway stretch. 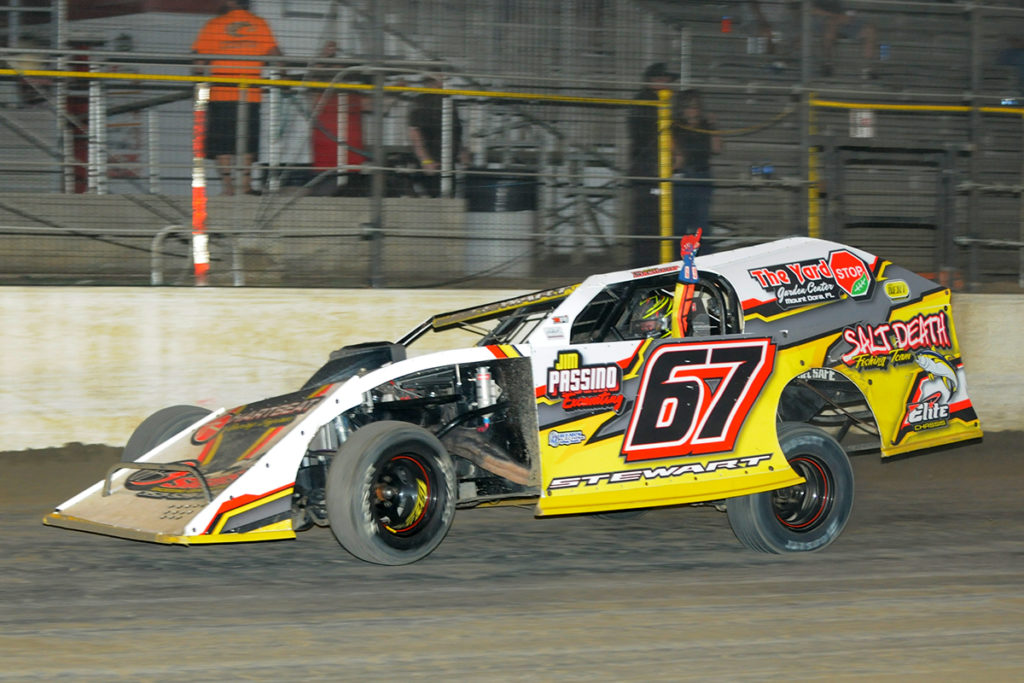 The Street Stocks was a similar case tonight like the 604 Late Models where the leaders all stayed close to each other with battles for positions all across the 20 lap feature.

Jimmy Wagner, Donnie Ashford and Alan Peacock all jockied around for the top three positions throughout the feature. Peacock stayed up front for the majority of the feature with Wagner knocking down his bumper in the second spot.

After close calls and heartbreak in not winning in 2022, Peacock finally came home a 2022 feature winner with Wagner finishing second and Ashford third.

When asked about if he knew how close Wagner and Ashford were behind him, Peacock exclaimed “I kept hearing them behind me throughout the race, but never in front!”

Peacock’s first win of 2022 adds a cushion to his lead in the points over Bruce Griffin by 16 points. 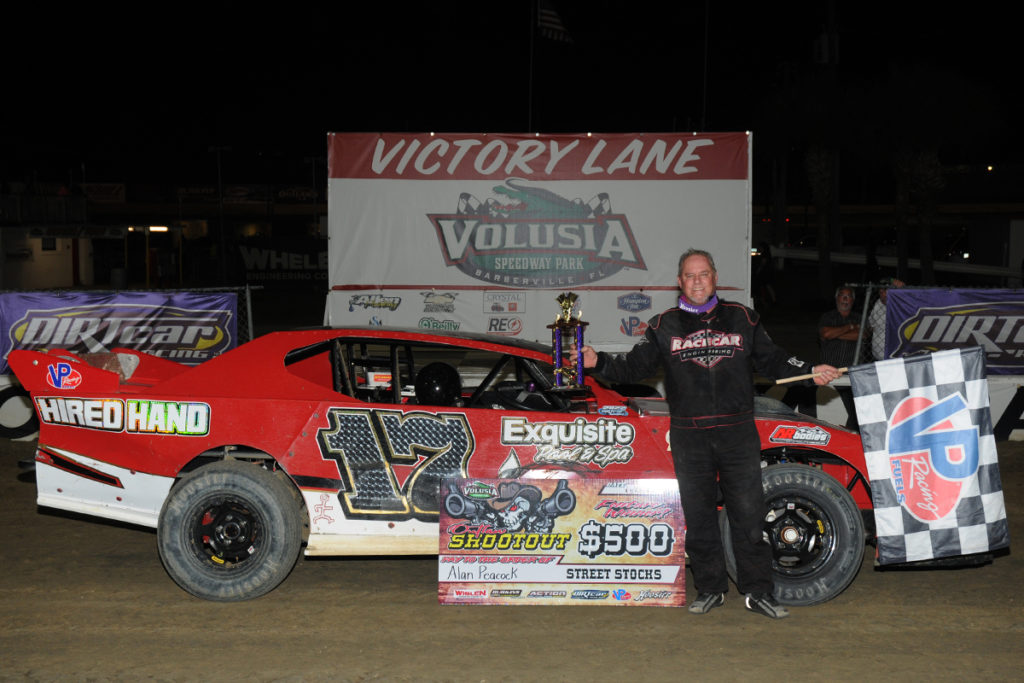 In Thunder Stocks, you could be safe to call it the Justin Reynolds Show.

In the heat race, he made a daring three wide move to take the lead on the opening lap after starting back in the fifth spot. He went to win the heat and headed straight to the lead in the feature.

It wasn’t all a cakewalk though. Reynolds was challenged by Thunder Stocks star Joe Belkey. The 20 of Reynolds finished in the top three in every Thunder Stocks race he entered this season and he was ready to finally knock down the win that eluded him this season.

After 20 laps of close racing and hanging on to the lead, Reynolds came under the checkered flag with his first win of the 2022 season.

In his interview with DIRTVision, he credited the competition for keeping it clean and fun and is willing to take up sponsors that are looking to get into local dirt racing. 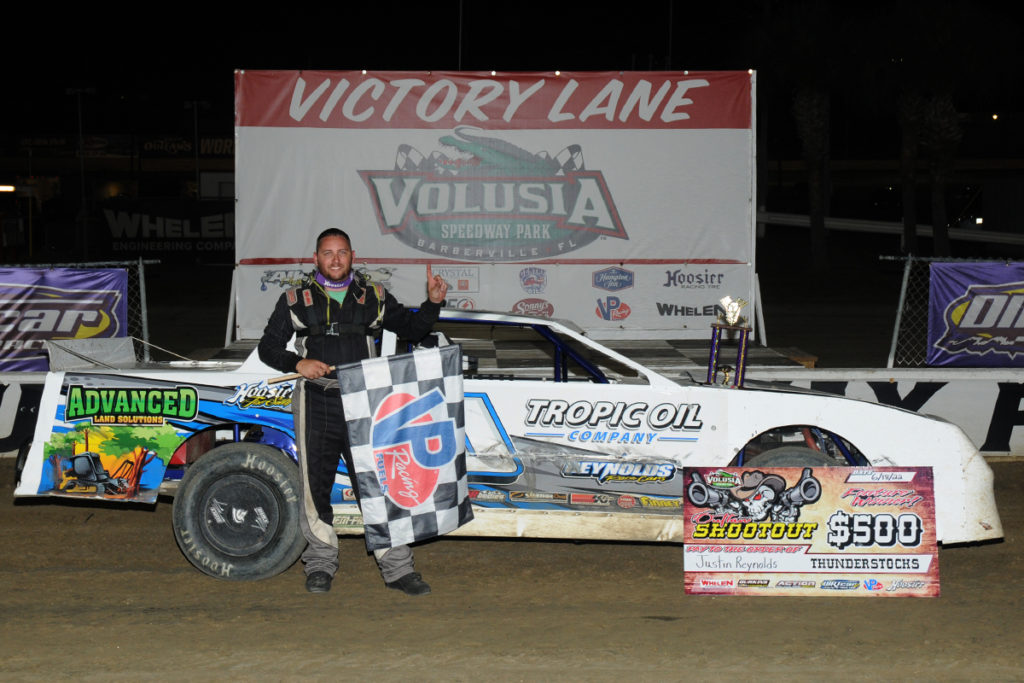 The next race for Volusia Speedway Park will be the Clay Classic on June 25th. TIckets are $12 for general admission with kids 12 and under getting free admission. Tickets can be purchased at the gates and they will open on race days at 4:00PM. Hot Laps will roughly start two hours after at 6:00PM.

You can also watch all the action live on DIRTVision with a FastPass subscription. We’ll see you on the 25th.