The return of the Top Gun Sprint Car Series, young guns claiming the late models, and fast paced action were the ingredients to what made tonight’s Top Gun Classic worth the wait.

Even though it doesn’t feel that long, the Top Gun Sprint Cars returned to the World’s Fastest Half Mile for their first of three races at the track for their 2022 campaign. Tonight, it was all the Danny Martin Jr show as he dominated the majority of the times he was out on track. He started the night out by winning his heat race with Brandon Grubaugh challenging at times.

After an invert and starting 7th, Martin quickly made up ground and took the lead early in the program. From that point on, it was all eyes on him as he led over five seconds for the majority of the feature. Cautions and lap cars didn’t do him in either, as he led with Grubaugh behind him to take the Top Gun win. It’s his 6th win of the season, making his championship bid early in the 24 car.

In the 604 Late Models, it was looking to be David Clegg’s race throughout the majority of the night.. That was until Trey Mills had something to say about it.

Winning his heat, Mills was bound to start the night smooth. He had competition all around the 20 lap feature from Jackson Hise, Mark Fleischer and Clegg. But at the end, the fourteen year old driver took home the $1,000 check after getting past Clegg with a few laps to go.

Mills wasn’t the only young gun to win in a late model tonight through all the chaos and excitement of the 602 Late Models. At the start of the feature, it was looking like it would be the night where Mikey Kopka would have all his gremlins sorted out and get home the win in the late models. However, Kole Platt and Jackson Hise challenged Kopka for the lead, with Platt leading the final few laps.

When a late race caution came out, Platt went slow on the throttle and opened the door for Hise. He took the lead going into turn one and didn’t look back the rest of the way. This marks Hise’s 2nd win at Volusia this season and could be some added momentum into the Gator Nationals.

The final two laps were nothing short of heart racing for Chris Olmstead and Timmy Hogan in the ¾ modifieds. Throughout the night, the two drivers swapped the lead through both their heat race and feature. Even with cautions being thrown almost every five laps for the chaos, it also made the show closer and exciting.

Coming into turn one with two to go, Timmy Hogan lost brakes and drove high into turn one, easily giving Olmstead the lead. All of a sudden after exiting turn two, Olmstead ran out of fuel and began sputtering. Hogan retook the lead and won. A closing Korbin Minchew finished second, so he will continue to lead the points.

Finally, the Street Stocks was nothing but the Jimmy Wagner Show. The Reutimann Racing driver won his heat race earlier in the evening and was smooth the whole race. It’ll be a major gain if he continues to race for the Street Stock championship when November arrives.

The next race at the World’s Fastest Half Mile will be the Gator Nationals. Gates open at 4:00 with Hot Laps at 6:00. The racing will also be broadcasted live on DIRTVision. We’ll see you then! 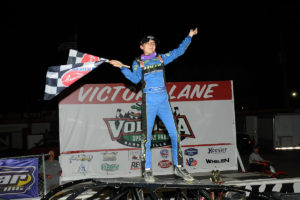 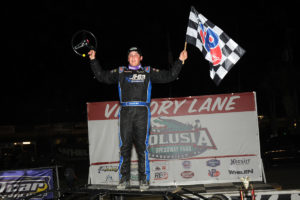 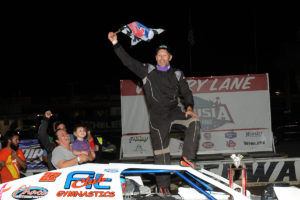 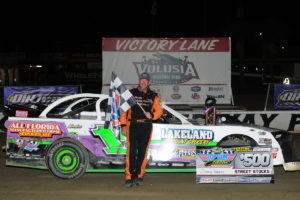