‘WE GOT A GATAH!’: Britten edges Phelps by 0.025 seconds for first DIRTcar Nationals win

The hunger in Peter Britten was visible. Wild and untamed. He threw his Big Block Modified into every corner with an anger, scaring any rut more than it intimidated him.

Tuesday night, it cost him a win. Wednesday night, a different story. However, just as hellaciously entertaining.

When the white flag was revealed during the second Super DIRTcar Series Feature of DIRTcar Nationals at Volusia Speedway Park, Britten was about two car lengths behind leader Jimmy Phelps. On entry to Turn 1, Britten sent it. Manhandling his machine through the bumps, Britten pulled ahead of the #98H on corner exit.

The lead was his, but only for a second. Britten had about a two-car length gap on Phelps going into Turn 3 but lost it when he slid high and Phelps dove low. The lead then transferred back to Phelps as he exited Turn 4. But Britten’s hunger persisted. Staying in the throttle, he torpedoed down the front stretch, pulling even with Phelps, bringing everyone to their feet. At the line, Britten edged Phelps by 0.025 seconds for this first DIRTcar Nationals win.

“Kind of made an all or nothing move in Turn 1, Baja jumped but it came off, you know,” Britten said, before letting his emotions loose, yelling “We got a gatah! Yeah!” 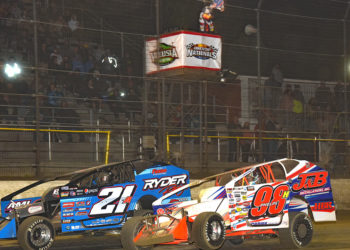 The victory – this third career Super DIRTcar Series win – was redemption after losing an epic duel with Stewart Friesen the night before.

He wasn’t the only driver on a redemptive drive throughout the night, too. Coming off a career year with the Super DIRTcar Series, Jack Lehner entered the week with a head full of confidence and a car full of speed. Tuesday night, he got collected in an accident while running second in his Heat Race. Wednesday night, he set the Billy Whittaker Cars Fast Time Award and won his Heat Race.

When the 30-lap Feature commenced, Phelps pulled ahead of Friesen and Britten hit a rut, allowing Lehner to pass him for third.

In the opening laps, Phelps ran low, while Friesen ripped the top. The momentum of the high side propelled the former DIRTcar Nationals champion to Phelps’s rear bumper. But while trying to charge around Phelps on Lap 5, the J&B Insulations Inc. #98H slid up the track in Turn 4, blocking Friesen’s run and forcing him to find his brakes. That allowed Lehner to slide by Friesen for second. However, he lost the spot a few laps later just before the caution lights came on.

When the race resumed, like Batman jumping out of a dark alleyway to surprise his foes, Britten surprised Friesen and Lehner, splitting them three-wide through the middle in the first corner to go from fourth to second. Friesen slid over the cushion the next corner, causing him to fade to fifth and was never a factor for the rest of the Feature.

Lehner, however, continued to show his muscle, driving back by Britten for second shortly after.

“I didn’t feel like I had that good of a car at the start,” Britten said. “I felt like I was bouncing too much, a little out of control.”

The race went quiet for the next dozen laps. Phelps held a comfortable lead over Lehner. And Britten wasn’t within striking distance of the #2L machine. Then, with 10 laps to go, Phelps caught the back of the field.

With three laps to go, Britten moved high, unafraid of the bumps that could kill his momentum. Instead, it boosted his momentum, launching him alongside Lehner for second-place in Turn 3, while the youngest of the three was banging on Phelps’s rear bumper. With two laps to go, Britten pulled even with Phelps down the backstretch, edging him for the lead in the next corner, but slid high and allowed Phelps to pull ahead with the white flag in the air.

Then, the hunger took over. Wild and untamed. Unwilling to let another chance at victory slip by. Britten finally got to park his Ryder Racing #21A Big Block in Victory Lane at Volusia and earn the iconic golden gator (or crocodile as the Australian renamed it) trophy.

. @DIRTVision REPLAY: Check out the highlights from tonight's feature!https://t.co/2RjKMIXzEk

“From the moment we’ve unloaded we’ve been good,” Britten said. “I keep saying, you have to put yourself in the hunt and eventually something is going to come.”

For Phelps, another runner-up finish at Volusia. Another chance to get his first gator stolen. But still a good sign of speed for the rest of the week.

“[Britten] just drove his ass off,” Phelps said. “And honestly, he earned it. It’s a tough way to lose. I’ll tell you it sucks. Car was really good. Obviously, we have to work on getting it a little more versatile up top and in the middle and racing in traffic we have to be able to move around a little better. But around the bottom, I thought we had a really, really good car. Things are good. We have speed. I just hate it for my guys.”

Lehner, of Saratoga Springs, NY, rounded out the podium and like Phelps, while he would’ve loved his first gator trophy, there was still joy with his performance.

“I’m definitely happy about it,” Lehner said. “We had a good car. It wasn’t like a third place where we were just hanging on. We were able to contend there a little bit.”

UP NEXT
The Super DIRTcar Series continues Thursday, Feb. 17, at Volusia Speedway Park for the Series’ third day of DIRTcar Nationals action. For tickets, CLICK HERE.

If you can’t make it to the track, you can watch all the action live on DIRTVision – either online or with the DIRTVision App.