Less than 24 hours after sitting upside down in his Super Late Model, Mark Whitener climbed out of his DIRTcar Pro Late Model with a straw hat on his head and a smile on his face.

The Middleburg, FL driver found strength in his consistency and pure will to claim the first DIRTcar Pro Late Model Sunshine Nationals victory of the week Friday evening at Volusia Speedway Park – after the race was postponed from Thursday night.

Whitener “The Magic Man” said he was sore and battled brake issues in the final half of the 25-lap Feature, but knew he had a strong new Savage chassis underneath him.

“I knew I had a pretty good hot rod,” Whitener said. “This is a new car for us. Thanks to Jason Welshan at Savage (Chassis). That was scary in the Super last night. My hands are sore. I’m sore all over… but to be in Victory Lane for this Sunshine deal, it’s pretty much at home for us. Just appreciate everyone that puts this show on. Everybody is doing the best job they can.”

Shan Smith led the field to the initial green flag with Whitener in tow. The two paced ahead of the field in the early stage of the race, while Nevin Gainey made his way from fifth to third in the first two laps.

Smith held a strong command of the lead around the half-mile track until lap traffic became a hindrance. During an attempt to pass a group of slower cars around the outside, Smith was pushed out of the groove into a dirty lane, losing grip and allowing Whitener to sneak underneath him. The two raced side by side for a straightaway before Whitener launched ahead with the lead and never looked back.

“When I was leading and got to lap traffic, I should’ve just rode in behind those guys but I was afraid that Mark (Whitener) was going to dive out there to the outside and just drive around me and I’d get caught with my pants down. I just dive-bombed those guys around the outside and they kind of hung me out to dry when I was lapping them. That was the race.

“Basically, if you got off the bottom you were done. So, I want to thank all my guys for helping me and supporting me. We’ve been busting our butts like everyone else here.” 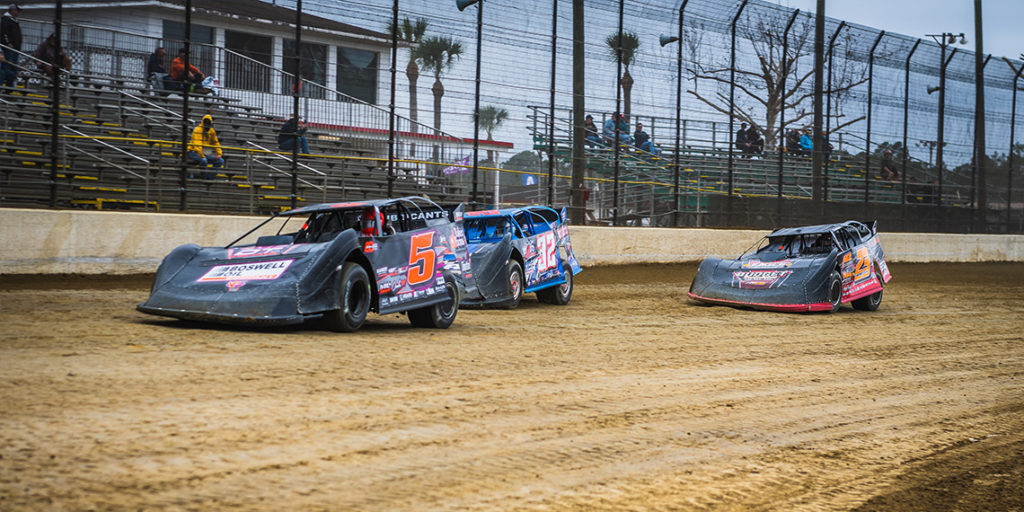 Whitener lost his rear brakes with 10 laps to go and had to readjust his approach to each corner but stayed committed to the bottom. Smith began to pull in Whitener, getting close enough to grab his bumper with eight laps to go. However, he hit a rut in Turn 2 and faded back into the clutches of Cory Hedgecock in third.

Three laps later disaster almost struck Whitener as a car slowed to a near stop in front of him to turn into the pit area, forcing him to lock his brakes and wrangle his car straight to avoid a collision. That allowed Smith and Hedgecock one last attempt at Whitener.

The “Magic Man” was in another dimension, however, needing only a corner to distance himself from his hunters again.

He drove away to claim a needed victory in a doubleheader day of racing around The World’s Fastest Half-Mile in which he’ll be pulling double duty with the DIRTcar Pro Late Models and World of Outlaws Late Models.

“I’d just like to thank everybody that is out here,” Whitener said. “All these fans and everybody that helps me on this car. Especially Jason Welshan at Savage Chassis. First night out and this thing was badass.”

UP NEXT
The DIRTcar Pro Late Models return tonight for the second night of the Sunshine Nationals at Volusia Speedway Park. If you can’t make it to the track, you can watch all the action live on DIRTVision.

Tickets for the Sunshine Nationals are available at the track or by clicking HERE.