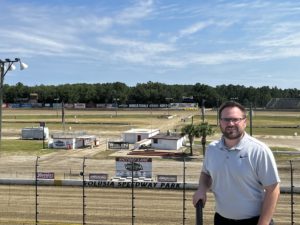 Tate was raised in Carlisle, PA and is a graduate of Cumberland Valley High School, Robert Morris University and Ohio University, where he earned his bachelor’s degree in Business and Master of Sport Administration.

From there, Tate embarked on a career that has included stints at Darlington Raceway, Chicagoland Speedway and Route 66 Raceway as Senior Manager of Ticketing Operations for NASCAR. Prior to his time at NASCAR, Tate worked with Penn State University, the Pittsburgh Steelers and the Tampa Bay Buccaneers. He has also worked with local universities and student career centers for the next wave of students to work in sports.

He is no stranger to dirt racing, as he grew up in the world of dirt karting with the PDKA and WKA series. He also spent his time in Pennsylvania attending events at Williams Grove Speedway and Port Royal Speedway.

“I’m excited to welcome Anthony as the new general manager of Volusia Speedway Park and to see the ambition he’s bringing to the speedway,” said World Racing Group CEO Brian Carter. “The value of his experience has shown with new ideas he’s already implemented.”

Volusia Speedway Park — The World’s Fastest Half Mile — has been in operation for racing since 1968. The track was originally built by Benny Corbin as a way for dirt racing to grow in the Volusia County area. He owned the facility until 1982. Today, World Racing Group owns and operates Volusia Speedway Park, which plays host to the prestigious DIRTcar Nationals, Sunshine Nationals and Dale & Emil Reutimann Memorial in addition to its weekly racing program.