Sunshine and palm trees await the World of Outlaws Late Models as they gear up for their second appearance at Volusia Speedway Park in 2022.

Gator hunting for The Most Powerful Late Models on the Planet goes from Feb. 16-19, but not before handling unfinished business.

Drivers will accumulate points through the four World of Outlaws Features and the two DIRTcar Late Model Features on Feb. 14-15 to determine a weeklong points champion. The Sunshine Nationals make up Feature during Wednesday’s program will not count toward the weekly total.

Last month, Dale McDowell, of Chickamauga, GA, opened the 2022 season with a heartwarming victory during Sunshine Nationals in his first race after beating cancer for four months. The “Mac Daddy” dominated the event, leading all 30-laps and holds the points lead entering DIRTcar Nationals. He also has a chance to go back-to-back, as he’ll start second in the held over Feature from Sunshine. 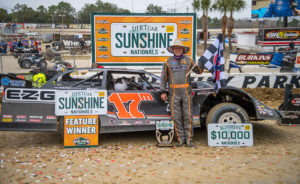 Atop the list of drivers McDowell will have to fend off is defending DIRTcar Nationals champion Devin Moran, who also picked up a DIRTcar Nationals Feature win last year. The Dresden, OH driver held off challenges from Bobby Pierce, putting together a consistent week to win his first “Big Gator” trophy.

While those drivers are hungry to find Victory Lane again, the World of Outlaws regulars will likely have something to say about it.

Even though all eyes are on Sheppard and Richards in the epic battle for Series supremacy, a mix of veterans and rookies will try to keep them at bay.

Dennis Erb Jr. and Chris Madden are coming off top-five finishes in the season opener and hope to keep that momentum rolling into February. Max Blair, who leads the race for Rookie of the Year, is also off to a hot start with an eighth-place finish. 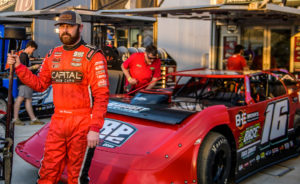 Another driver to keep an eye on is 2021 World of Outlaws Rookie of the Year Tyler Bruening, who scored his fourth straight top-10 at “The World’s Fastest Half-Mile” in January.

Don’t miss out on the World of Outlaws Late Models as they make their final appearance at Volusia, Feb. 16-19, and hunt for the iconic Big Gator trophy. For DIRTcar Nationals tickets: CLICK HERE.

If you can’t make it to the track, watch all the action live on DIRTVision – either online on with the DIRTVision App.